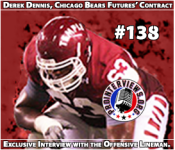 Derek Dennis didn’t start playing football until he was a junior in high school. He ended up playing in 49 games in his career at Temple University. He earned 36 starts on the offensive line, and was signed by the Miami Dolphins after the NFL Draft. He recently just signed a futures’ contract with the Bears. Dennis talks about what it was like to be shown on the first episode of 2012 Miami Dolphins HBO’s Hard Knocks! Make sure you check it out, enjoy reading the first interview back from a little break. It’s worth a read.

Max Strauss : How do you connect with your fans?

Derek Dennis : I mostly connect with fans through social networking sites. I use Twitter and Facebook… I also try to meet with them in various places. I really love meeting the fans.

Strauss : How did you start playing football?

Dennis : I started playing during my junior year of high school, and honestly, it was just to fill-in space before basketball season. That was my real sport in high school.

Strauss : What was a situation of adversity that you faced growing up?

Dennis : I had a lot of situations that helped mold me as a person and athlete. However, I think the biggest was people always telling me I that I was not good enough to do anything. It always made me want to prove all the doubters wrong, and that I was great at what I do.

Dennis : It wasn’t good until my senior year of high school when I transferred to Trinity-Pawling, and played for Coach Dave Coratti.

Dennis : It was great. I received plenty of offers from schools. I even had the opportunity at a number of universities to be a two-sport athlete, but at the end of the day, I chose Temple.

Strauss : What made you end up at Temple?

Dennis : The atmosphere of Philadelphia really drew me in there. I loved the city and I completely believed in what Al Golden and his staff were preaching.

Strauss : What was it like to get on field action starting your true freshman year?

Dennis : It was a very surreal experience because I did not have a lot of football experience prior to that, so I expected to red-shirt but my coaches believed in me and my abilities.

Strauss : What was the most important thing you learned at Temple?

Dennis : I learned how to maintain a great work ethic and how important it is to give tremendous effort at all times. At Temple, I also became a student of the game and worked at my craft.

Dennis : It was great I had a chance to play for a wonderful staff and experienced a chance to go to another bowl game and win it! it was a historic season in many aspects and helped propel the Temple program to new levels.

Strauss : What was your favorite block you had in your career at Temple?

Dennis : During my freshman year against Penn State, I actually pancaked Dan Connor in the red zone. This was around the time that there was all of this hype around him that he would be an All-American and a first round pick. That’s when I realized I could play this game at a high level.

Strauss : Tell me some more about the East-West Shrine Game…

Dennis : It was a great time. The best part was visiting the Shriners hospital and playing with those kids and seeing the smiles on their face. Man, it was such a humbling experience for me. It made me ever so grateful for the opportunities that I have been blessed with.

Dennis : I was blessed to get the opportunity to play in this league, but I was a little depressed after NFL Draft because I was expecting to hear my name, but it played out differently. However at the end of the day, I still got a shot.

Strauss : You made an appearance on HBO’s Hard Knocks, did you expect it?

Dennis : No I didn’t. I was first guy cut. I actually didn’t think I was around long enough. The entire experience was cool though, because I gained notoriety from being on it and they portrayed me the way that I was when it happened. I try to handle myself well at all times and I think they captured that.

Dennis : It was an awesome feeling, because of the uncertainty that you feel when you get let go. I was not sure if someone else was going to give me a shot, and that’s a horrible feeling. But, being in that organization was a blessing.

Strauss : What was it like to be out of the NFL this past year?

Dennis : The worst feeling. It’s an experience that I never want to deal with again. I will say that it helped teach me to keep my faith and believe that God has a plan for me, and I knew my path in the NFL was not complete.

Dennis : It was just a sign of my work and passion being recognized by their front office as a future asset to the team. It was also a great blessing.

Strauss : What do you bring to the Bears organization?

Dennis : I am a player who is versatile along the entire offensive line. I am coachable and I am a hard worker. I will bring my passion everywhere to become a student of the game.

Dennis : I would say, Chocolate Chip Cookie Dough, because I have some hard and soft parts about me.

Strauss : For someone who wants to play football to eventually make the NFL, do you have any advice for them?

Dennis : Work hard at your craft and always have belief in yourself because it takes a lot to move up to the next level, but strive for great intangibles, because you need them to be successful in football and in life.

Strauss : Thank you for your time Derek.

Dennis : I just want to thank you for all the support through my NFL journey. It is helping me stay humble and continue to be blessed. I love all of you!