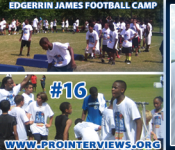 When I heard about the Edgerrin James Football Camp in Ave Maria, Florida, I knew Pro Interviews had to take a 2 hour drive there and be in attendance. I have heard throughout the last few years that former Miami Hurricanes RB was a class act. I read an article that he continued to give back to his hometown of Immokalee and to underprivileged youth. In the past,  Edgerrin James paid for these free football camps and organized it, but he also continues giving something that has no dollar value. He gives his hometown his time.

Edgerrin James finished in the NFL with four Pro Bowls, broke 12,000 career rushing yards, and consistently and silently led his team through his undeniably strong work ethic. James’ Football Camp has been going on for years now. One of the assistant coordinators was Edgerrin’s fullback in pop-warner and in high school, and to this day, still comes out and supports his former teammate.

There were over 500 kids who showed up, and the foundation raised money for their buses, paid for their lunches, and paid for their great new shirts, and gave them an opportunity to have a day full of activities in Ave Maria. Interestingly enough, I was told by one of this assistant coordinators that this all started off by Edgerrin James paying out-of-pocket. Edge not only did that, but since he has been out of the league, James volunteers his time, Monday through Thursday in Orlando every summer to provide an eight-week football clinic for the underprivileged youth. The best part about this camp is that is absolutely free.

Strauss : What brings you out here?

Edgerrin James : We have this football camp ever year. We put on a nice camp for the kids of Immokalee and also bring the kids in Orlando.

Strauss : Every summer, you volunteer for eight weeks, Monday through Thursday, a similar situation to what is going on today… Will you talk about that?

Edgerrin : It’s one thing I’ve done with my foundation for about four years now. We want to develop the kids throughout the summer. We put on an eight week camp because I don’t think that you can develop kids within a one day camp, or a one day camp. It takes time to implement what you want them to do, and to get them to understand the basics of everything.

Strauss : As someone who was a very successful player in NFL history, what’s some advice that you give to these kids?

Strauss : How do you plan to keep this event looking into the future?

The camp give the kids an opportunity to work together and to split up into groups by age and focus on their abilities. James’ desire to see these kids succeed is apparent when he is running drills with them or whether he is working with his volunteers. While the little kids were grabbing lunch, the older kids participated in one-on-one drills. This became extremely competitive and was fun to watch.

I spoke with Alicia Hodge, who is charged with fundraising for Edgerrin James Foundation talked with me. She let me know that the fact that James is so well-known has fans everywhere, their goal is to “spread the word about what he is doing every summer.” They are continuing to look for more funding as Edge himself has big goals for his foundation. She told me that Edgerrin himself is “very hands-on,” and makes sure to contribute and put his mark on everything that the Foundation does. They are thinking about bringing back a possible All-Star Basketball or All-Star Bowling event in the future to help raise funds for the camp.

In attendance was former Wisconsin Badgers DB, Aaron Henry, and former Florida Gators DB, Markihe Anderson. I also was fortunate to meet other former teammates of Edgerrin James. His coordinators have known him since pop-warner days, and I was fortunate enough to meet his brother.

Throughout the day, I saw a man who was wearing long sleeves, and was motivating every kid that came into his path. This man was Walter James, Edgerrin’s younger brother. He was extremely energetic and very talkative, and I really connected with him because of that. He told me that he played for Illinois State and earned a tryout with the Indianapolis Colts, but ended up playing a bit with the Berlin Thunder in the days of NFL Europe.

I was not planning to meet former Miami Hurricanes and NFL running back, Javarris James. However, one day I was hoping to interview him, and that day was when we met. He could not have been nicer and more willing to talk, and I am happy he still supports his cousin.

Strauss : What are you up to now-a-days?

Javarris James : I tore my ACL, so I’m rehabbing right now. My primary focus is for me to get healthy.

Strauss : What brings you out here today?

Javarris : My cousin Edgerrin James has a football camp every year. I want to give back. I was once one of these kids out here today who looked up to the guys out here. I just want to let them know that we come from the same parts of town. We come from the same neighborhoods, we walked the same sidewalks, and we walked the same hallways in school. They got to see us on TV, but I know that for them to see us now, it brings smiles to their faces.

Strauss : What’s it like to know that Edgerrin James has so many people coming out here to support his cause today?

Javarris : It just shows the amount of respect that Edgerrin James has around the community. People come and volunteer their time. That is one of the best things you can give to kids. If you can give them your time, they’re not asking for anything else. Everyone in the community comes together for Edgerrin because we are a small town that sticks together. All of us can say that Edgerrin James is a perfect role model for someone like me, and especially for the kids here today.

Strauss : What was it like to play for the Miami Hurricanes?

Javarris : It was a dream come true. It was the greatest decision I made. It’s all about the U. It’s a family. I have my family in Immokalee, but I also have a Canes Family. You have to be one to understand. It’s crazy how more people recognize me from my days as a Hurricane, compared to my days  playing professional football. A lot of these kids come up to me today and tell me, ‘I am going to the U too, and I am going to wear number five like you.” It brings a big smile to my face.

They ended the day with a 9-on-9 competition, it added to what I would say was the meaning behind the day, and that is that anyone can get better by working together. Everyone contributed to the greater good, and provided many lessons for kids that they can take with them off the field.