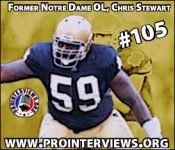 Chris Stewart was a member of Notre Dame Fighting Irish from 2007 through 2010. He entered the 2011 NFL Draft, but went undrafted through the seven rounds. He then signed a small contract with the New York Jets, but was cut before the final roster cuts. He never made the 53 man roster. He is currently on the Arizona Cardinals roster and fighting for a spot in the 53-man final roster. Click here to read the interview that we did in the middle of 2011 NFL season.

END_OF_DOCUMENT_TOKEN_TO_BE_REPLACED 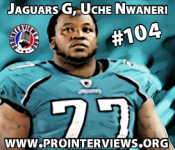 Uche Nwaneri played college football at Purdue University. He then entered the 2007 NFL Draft and was drafted in the 5th round. He has remained with the Jaguars since 2007. He has started 61 games in his career, and taken part in 73 total games. Nwaneri is considered the best offensive guards in recent Jacksonville Jaguars’ history. Check out our interview that was conducted in the middle of the 2011 NFL season.

END_OF_DOCUMENT_TOKEN_TO_BE_REPLACED 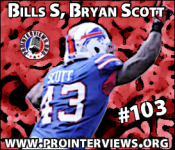 Bryan Scott played college football for the Penn State Nittany Lions and he entered the 2003 NFL Draft, and was drafted in the 2nd round, 55th overall by the Atlanta Falcons. He was a teammate of Michael Vick back in the day with the Falcons. He went through rough years in his career before finding a home in Buffalo. He has been with the Bills since 2007. Check out our interview that was conducted towards the middle of the 2011 NFL season.

END_OF_DOCUMENT_TOKEN_TO_BE_REPLACED 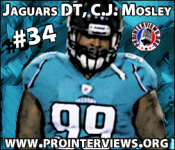 C.J. Mosley attended Missouri University. He then entered the 2005 NFL Draft, and was selected 191st overall by the Minnesota Vikings. Right after his rookie season, he was traded to the New York Jets. He was a member of the Jets for three years. In 2009 and 2010 he was on the Cleveland Browns roster before they cut him. The first interview was conducted once right before the 2010 NFL season. Then, he signed with the Jacksonville Jaguars, and the 2nd interview was done in the middle of the 2011 season. He recently re-signed to remain with the Jags. END_OF_DOCUMENT_TOKEN_TO_BE_REPLACED 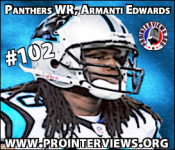 Armanti Edwards was the QB of Appalachian St. Mountaineers from 2006 through 2008. He had some great statistics during his time at App State. He entered the 2009 NFL Draft and was considered one of the top dual-threat quarterbacks coming into the league. He was drafted in the 3rd round, 78th overall by the Carolina Panthers. He threw his first completed pass this past season. This interview was conducted in the middle of the 2011 NFL season.