Enoka Lucas played college football at the University of Oregon. He earned All Pac-10 honors during his junior and senior years. He was recognized as one of the best Pac-10 centers. He entered the 2007 NFL Draft, but went undrafted. He played for the Texans, Titans, and Cardinals. He was on the sideline during their Super Bowl appearance. He then played for the Florida Tuskers of the UFL for a couple of years, and became the starting center. He is now out of football. This interview was conducted shortly before the 2011 NFL season was over. END_OF_DOCUMENT_TOKEN_TO_BE_REPLACED 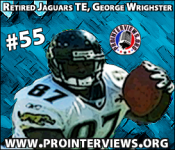 George Wrighster played college football for the University of Oregon. He then entered the 2003 NFL Draft, and was selected by the Jacksonville Jaguars in the 4th round, 103rd overall. He was a member of the Jaguars from 2003 through 2008. He was known for occasionally getting open, but also for his above-average blocking skills. This interview was conducted in the 2010 NFL season and this was when he was a member of the UFL, Las Vegas Locomotives. END_OF_DOCUMENT_TOKEN_TO_BE_REPLACED

Samie Parker played college football for the University of Oregon. He was one of Kellen Clemens’ favorite wide receiver targets, and was known as a tremendous deep threat. He entered the 2004 NFL Draft, and was selected in the 4th round by the Kansas City Chiefs. SP played four seasons with the Chiefs, and then bounced around the NFL with different teams. He also played in the AFL for the Chicago Rush. [UPDATE: In 2010 and 2011, he also played in the United Football League (UFL) for the Las Vegas Locomotives.] END_OF_DOCUMENT_TOKEN_TO_BE_REPLACED

Jerome Boyd was born in Los Angeles, California. JB played collegiately at the University of Oregon. He was a linebacker, but later made the switch the safety.  He accumulated 178 tackles, 18.5 tackles for loss, 8 pass deflections, and 6.5 sacks throughout his career with Oregon. He entered the 2009 NFL Draft, but was undrafted. He then earned a chance with the Oakland Raiders, and was placed on their practice squad in 2009. In 2010, he was cut by the Raiders. This interview was conducted before the 2010 NFL season.