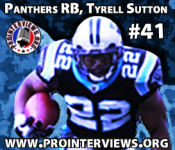 Tyrell Sutton played running back for Northwestern University. He earned playing time all four years while he was there. TS entered the 2009 NFL Draft, but went undrafted. He signed a UDFA contract with the Green Bay Packers and during the preseason he played very well, but was still cut by the Green Bay Packers. He then signed with the Carolina Panthers. He returned kicks, ran the ball, and also caught passes out of the backfield. This interview was conducted in the early part of the 2010 NFL season. [UPDATE: He is currently a member of the Seattle Seahawks and fighting for a roster spot.] END_OF_DOCUMENT_TOKEN_TO_BE_REPLACED 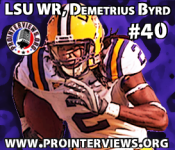 Demetrius Byrd played wide receiver for Louisiana State University. He first started playing at Pearl River Junior College and was a complete stud. He then played for LSU in 2008 and 2009 totaling over 1000 receiving yards, 11 touchdowns, and had 72 receptions. He entered the 2009 NFL Draft, but was selected in the 7th round by the San Diego Chargers. When he was drafted, he was in a coma after suffering a serious car accident. He signed with the San Diego Chargers, and was placed on the non-football injury reserve list. This interview was conducted before the 2010 NFL season. END_OF_DOCUMENT_TOKEN_TO_BE_REPLACED 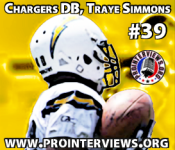 Traye Simmons first played junior college at the College of the Sequoias. He then transferred to play for the University of Minnesota. He entered the 2010 NFL Draft, but actually went undrafted. He signed a undrafted free agent contract with the San Diego Chargers. He didn’t end up making the final roster and was cut right after the Chargers’ preseason. [UPDATE: He has been out of the NFL since he was cut by the San Diego Chargers.] END_OF_DOCUMENT_TOKEN_TO_BE_REPLACED