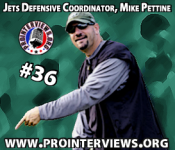 Mike Pettine played safety at the University of Virginia in the 1980s. He then decided that he wanted to coach football. He coached high school football from 1996 through 2001. He then joined the Ravens Coaching staff with Rex Ryan and they became instant friends as they both worked together on the defensive line. He was a member of the Ravens’ staff from 2002 through 2008. He left to become the Defensive Coordinator of the New York Jets when Rex Ryan (the Ravens’ DC) left to become the Head Coach of the New York Jets. This interview was conducted with MP before the 2010 NFL season. END_OF_DOCUMENT_TOKEN_TO_BE_REPLACED 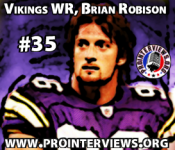 Brian Robison played defensive end for the University of Texas from 2003 through 2006. He established himself a great pass rush threat. BR entered the 2007 NFL Draft, and was selected early in the 4th round by the Minnesota Vikings. He has been a backup to Jared Allen throughout his career, but still brings a great pass rush to the Vikings Defensive Line. This interview was conducted before the 2010 NFL season. [UPDATE: He recently re-signed with the Minnesota Vikings.] END_OF_DOCUMENT_TOKEN_TO_BE_REPLACED

Freddie Brown played wide receiver for the University of Utah. He was very productive during his senior season accumulating 77 receptions, 900 yards, and 7 touchdowns. He entered the 2009 NFL Draft, and was selected 224th overall by the Cincinnati Bengals. He made the Bengals practice squad during his rookie season. This interview was conducted before the 2010 NFL season. [UPDATE: In 2010, he signed with the Minnesota Vikings 53-man roster.] END_OF_DOCUMENT_TOKEN_TO_BE_REPLACED 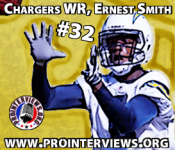 Ernest Smith played wide receiver for Baylor University. After earning playing time throughout his four years at Baylor, ES entered the 2010 NFL Draft, but went undrafted. He signed with the San Diego Chargers after the NFL Draft. [UPDATE: He was waived by the San Diego Chargers during the 2010 NFL preseason and has been out of the NFL since.] END_OF_DOCUMENT_TOKEN_TO_BE_REPLACED 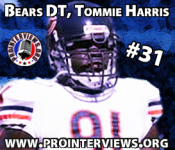 Tommie Harris played college football at Oklahoma University. He was a complete stud and then, he entered the 2004 NFL Draft and was selected 14th overall by the Chicago Bears. He was a member of the Bears from 2004 through 2010 compiling approximately 25 sacks, 200 tackles, and about 30 tackles for loss. This interview was conducted before the 2010 NFL season. [UPDATE: Since he was cut by the Bears, he signed with the Indianapolis Colts. After that, he was cut and then signed with the San Diego Chargers. He was recently cut by the Chargers.] END_OF_DOCUMENT_TOKEN_TO_BE_REPLACED

Curtis Brinkley played college football for Syracuse University. He was an all star running back for the Orange. He entered the 2009 NFL Draft, but went undrafted. He signed with the San Diego Chargers, and didn’t end up making the final roster. He then signed with the Chargers’ practice squad. Throughout his rookie season he mixed between the active 53-man roster and practice squad. [UPDATE: He has earned more playing time as he career has gone on. He is still a member of the San Diego Chargers. END_OF_DOCUMENT_TOKEN_TO_BE_REPLACED