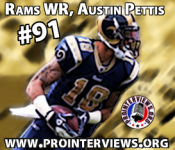 Austin Pettis was a starter since freshman year at Boise State from 2007 through 2010. He totaled 229 receptions and 2838 yards (which was ranks 2nd all-time in Boise State history). He also accumulated 39 touchdowns. He was selected twice as First-Team All-WAC in 2009 and 2010. He entered the 2011 NFL Draft, and was drafted in the 3rd round, 78th overall. During his rookie season with the Rams, he had 27 receptions for 256 yards.

Announcement : My name is Max Strauss with http://prointerviews.org/, http://facebook.com/ProInterviews/ and http://twitter.com/ProInterviews/. I’d like to welcome you to the interview with Austin Pettis. Pettis attended Boise State University. During both his junior and senior year, he was a first-team all WAC selection. He finished 9th all time in receptions and touchdown catches in Boise State history. He also finished 2nd in yards in his school’s history. He entered the 2011 NFL Draft, and was drafted in the 3rd round, 78th overall to the St. Louis Rams. He is eager for his career to start in the NFL. Here is the interview with Austin Pettis. I hope you enjoy the collages also. Please check out below to read answers to the personal questions.

Strauss : How do you connect with your fans?

Pettis : Back out here in Boise, if I see them, I hit them up. I also have a Facebook fan page and fans can connect to me on there. I also have a twitter.

Pettis : It was cool. We were successful in our games. It prepared me really well for college.

Strauss : What was the transition like from high school to Boise State?

Pettis : It was a little difficult, but it wasn’t that rough. My high school runs their program a lot how Boise does, so it wasn’t a bad transition.

Strauss : Do you have a favorite memory from your career at Boise State?

Pettis : Yes. Winning the Fiesta Bowl. It was a pretty good time, and we hadn’t won it for a while.

Strauss : You finished receptions 9th all time in receptions and touchdown catches at Boise State, and 2nd in receiving yards. Looking back, how do you think that’s going to help you in the future?

Pettis : It just shows that I can compete at a pretty high level. It also shows that I was successful at a big-time program in college.

Strauss : What was it like to be a four-year starter in such a high powered offense?

Pettis : It was nice to play early because I got to learn a lot. It prepared me for my next couple of years of my career to be successful.

Strauss : Did you have a best friend while you were at Boise State?

Strauss : Do you have a funny memory you share with them?

Pettis : Every day is a funny memory really. We had a good time at our house.

Strauss : Do you have something that your collegiate teammates probably don’t know about you?

Pettis : I went to private school my whole life until college. My uncle on my dad’s side, his brother, and my grandpa on my mom’s side, both played professional baseball.

Strauss : What was it like to attend the NFL Combine?

Pettis : It was fun. It was a good experience. It was a little hectic. They throw a lot at you. It was nice, and I did well for myself so I was happy.

Strauss : You ran the fastest shuttle for a wide receiver at the combine (3.88). What was the most important thing you did to train for that?

Pettis : I have been pretty decent at that, just because of my length. It was a huge thing to help me benefit. I trained a bunch at the facility down in California. They kind-of tweaked my technique. We figured it out, and it created a responsible time.

Pettis : Pro Day was pretty relaxed actually. I didn’t have to do anything that I did at the combine because I was happy with all my times and everything. I just had to run a couple of routes. I ran about fifteen routes and I was done.

Pettis : It was cool. We went to a really nice suite down in the Newport Area. We had a bunch of family out there. We just watched the draft, had a bunch of food, and drinks.

Strauss : Have you ever been to St. Louis?

Pettis : Yeah. I’ve been twice now, once last week. I also went the day after I got drafted. I went up there for a day.

Strauss : According to the Rams’ website, you’re number 83. Did you choose that?

Pettis : I didn’t choose that. They gave that to me. I’m hoping to get a number closer to ten, eleven, or twelve. Hopefully, I can get in that range.

Strauss : How excited are you to be teaming up with a young and rising quarterback in Sam Bradford?

Pettis : I’m very happy. I feel like I got the best-case scenario possible. We have a really young team, and a great quarterback. I had a pretty decent season last year, and hopefully I’ll be able to come out here and do the same.

Strauss : What do you see as your role with the Rams this year?

Pettis : Really, I just need to get out there and learn as much as possible. I’ll try to make plays whenever they put me on the field.

Strauss : Do you have a foundation or charity that you support?

Pettis : Not yet. I will be definitely taking caring of that in the future.

Strauss : Which coach do you think has had the most impact on your career?

Pettis : My receiver coach out here in Boise, Coach P. He taught me a lot. He really took care of me, and helped me. He was the reason why I was successful out here.

Pettis : Haha. I think I would be the vanilla-chocolate swirl/mix because I’m half-black.

Strauss : What is your favorite quote?

Strauss : For someone who wants to play football in the NFL, what’s the best advice you can give them?

Pettis : Listen to your coaches genuinely. Try to be as much of a sponge as you can. Knowledge helps you get really far in football.

Strauss : Is there anything you want to tell your fans from Boise or your new fans in St. Louis that we haven’t really talked about?

Pettis : I just really want to thank them for their support. I’m excited for more people to support me, and I’m excited to get to work out in St. Louis.

Strauss : Thank you so much for your time Austin.

Pettis : No problem man. Have a good one.

->Here are the personal questions that Austin Pettis answered.<-

Pettis : Kobe Bryant. He’s my favorite player, and I love how competitive he is.

Strauss : Who is the football star you look up today?

Pettis : Watching football, most recently, I like to watch Larry Fitzgerald these past few years.

Pettis : No, I really don’t eat pie. I’m not a huge dessert guy. I like Carrot Cake though.

Strauss : What would you order if you could choose your last meal on Earth?

Pettis : I would want to be playing basketball or baseball.

Pettis : People called me by my initials, AP.

Strauss : Thank you for answering the personal questions.