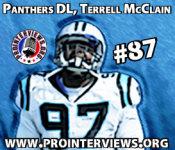 Terrell McClain played college football at the University of South Florida from 2007 through 2010. He was nominated 1st team All-Big East after a stellar senior season. During his time at USF, he totaled 89 tackles, 17 tackles for loss, 7.5 sacks, 10 QB hurries, 1 pass breakup, 2 forced fumbles, and 1 fumble recovery. He was drafted in the 3rd round by the Panthers of the 2011 NFL Draft. During his rookie season, he totaled 19 tackles and 1 sack. Click here to check out the interview that we did. This interview was conducted before the 2012 NFL season.
Download the audio with Terrell McClain, right-click this!

[audio https://prointerviews.files.wordpress.com/2011/05/interview-with-terrell-mcclain.mp3|titles= Interview with Terrell McClain|track=000000|width=614|border=ffffff|bgcolor=2c4e44|leftbg=000000|rightbg=000000|bg=000000|righticon=2c4e44|slider=2c4e44|lefticon=2c4e44|loader=2c4e44|text=2c4e44]
Add Terrell McClain as a friend on FaceBook by clicking this link here.
This interview could not be completed without the great help of http://OTGSports.com/
Follow @OTGSports Follow @ProInterviews 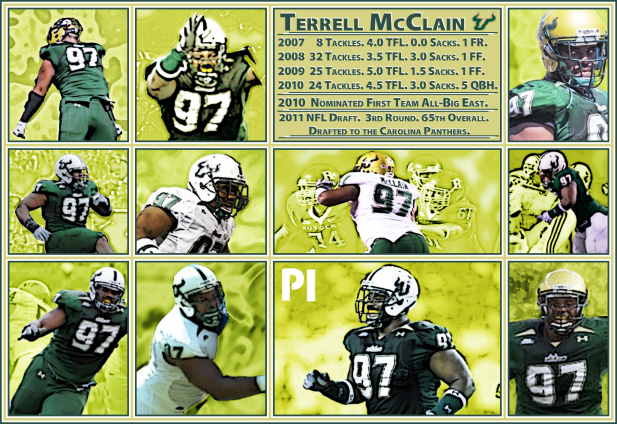 Announcement : My name is Max Strauss with http://prointerviews.org/, http://facebook.com/ProInterviews/ and http://twitter.com/ProInterviews/. I’d like to welcome you to the interview with Terrell McClain. McClain attended the University of South Florida from 2007 through 2010. During his senior year, he was nominated to become a First-Team All-Big East selection at Defensive Tackle. He then entered the NFL Draft in 2011 and was drafted in the third round, 65th overall to the Carolina Panthers. He is excited for his journey in the NFL to start. Here is the interview with Terrell “T-Mac” McClain, and I hope you enjoy the collage also. Please check out below to read answers to the personal questions.

McClain : No, not really.

Strauss : How do you want fans to connect with you?

McClain : It was different. I moved around. I went to two high schools. It was a great experience for me, and I learned a lot from school, education-wise and sports-wise. I had a good time in high school.

Strauss : What was the transition like from high school to college?

McClain : I think that time management had to be one of the things that was really big and different coming from high school to college.

Strauss : Was it hard for you?

Strauss : Did you have a best friend while you were at USF [University of South Florida]?

McClain : Sampson Genus. The first time we met, it was in high school, we met at a regional track meet. I could have shot-putted for state, but I was having too much of a goofy time with him. I didn’t place.

Strauss : Your senior year you were 1st team All-Big East. Will you take me through what your senior season was like for you?

McClain : It was different. I had more of a challenge due to the new coaching staff. It was also in assignments too, all I had to do was run upfield with the new schemes and what not. I think I did a good job of doing that, and I guess I was rewarded with becoming 1st team All-Big East.

Strauss : Do you have a favorite memory from USF?

McClain : I guess going to my first bowl game.  It was really something to fathom coming from high school. Coach Leavitt. It was my first year going to a Bowl game over there in Texas. It was against Oregon, and it pained me that we didn’t win. But, I was a freshman, so I wasn’t really too down.

McClain : The first two days it was kind of a drag because we were doing the medicals and physicals and what not. Then, the third day, it was a little laid back. Then, the fourth day, it was pretty much the heaviest day. We were running around, and doing drills. It was a great experience for me. I had a great time doing it.

McClain : It was a deciding moment for not just me, but my other teammates who were trying to showcase their skills for the coaches and the scouts that were there. I really had a good time hanging with the [USF] guys, and telling them what they expect and what they’re looking for, and trying to give them some wisdom.

Strauss : What do you think is the best and maybe most unique thing you bring to any NFL team?

McClain : It was great. On the phone, talking to them, and, ‘We’re getting ready to draft you.’ It was one of the best feelings that I’ve ever had in my life.

McClain : It was very interesting. At first, I just tried to stay calm. Then, I talked with all the people on the staff, the General Manager, the Head Coach, the D-Line coach, and the Defensive Coordinator. I was talking with everybody. It was a very nice conversation.

McClain : I feel blessed man. Not everyone can say be in my shoes right now. There were a lot of people who said that I was going to be drafted in the third round, some said not at all. I was really blessed, and I’m really grateful for everything that I’ve accomplished and that will come to me in the future.

Strauss : Have you ever been to Charlotte?

McClain : Yes I have. When we played in our last Bowl game. We played against Clemson in the Meineke Car Care Bowl. We actually played in their [Panther’s] stadium. Charlotte is a really nice city.

McClain : Oh, absolutely! It’s pretty much going to be another home game for me. I hope people come out and support me any way they can. I’m used to the environment so hopefully that’ll help.

Strauss : How excited are you to be a Carolina Panther?

McClain : I told everybody when I was being interviewed at the combine, they asked if I had a favorite team, I told them that my favorite team would be the one that drafts me. So, the Carolina Panthers are my favorite team because they see the potential in me. They drafted me in the third round, so I’m very blessed that they saw that in me, and I can’t wait to get there and start playing.

Strauss : Do you have a foundation or charity that you support?

McClain : Right now, I support the Shriners Hospital. That will pretty much be my charity for a little. I’m trying to come up with my own. But, right now it’s the Shiner’s Hospital.

Strauss : For someone who wants to play in the NFL, what’s the best advice you can give them?

McClain : Hard work and dedication always pay off. You’re always going to want to put in the extra work. The little things and never cut yourself short.

Strauss : Is there anything you want to tell USF fans or new Carolina fans that we haven’t really talked about?

McClain : No. That’s pretty much it. I’m not really a flashy guy. I am just a laid-back person. I don’t really have that much to say.

Strauss : Congrats on making it to the NFL, and thank you so much for your time Terrell, I really appreciate it.

McClain : I guess the President. I would like to meet him, and see how he’s doing and how he goes about doing his job, and try to see how he got over adversity.

McClain : Somebody I looked up growing up, was my dad. He was always there for me. He was really committed to me.

Strauss : Do you have a nickname?

Strauss : What would your last meal on Earth be?

McClain : I would probably go into coaching, probably around the high school level.