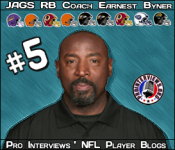 With That In Mind by Earnest Byner

Earnest Byner wrote his fifth blog. Byner wrote this one specifically about what it was like for him to train to become a Super Bowl Champion. He actually became one when he was a member of the Washington Redskins. He references some things that have helped him guide his career and who he is. He talks about the mentality that every team should have and about why he was so gifted. This was written before the 2011 NFL season.