Leon Washington played college football for Florida State University. He then entered the 2006 NFL Draft, and was selected in the fourth round, 116th overall by the New York Jets. He played for the Jets for four years primarily as a kick returner, punt returner, and a scatback to share the load with the other running backs on the team. During the 2010 NFL Draft, LW was traded to the Seattle Seahawks. He continued his All-Pro play performance and was their primary kick returner. This interview was conducted as the 2010 NFL season was coming to an end. 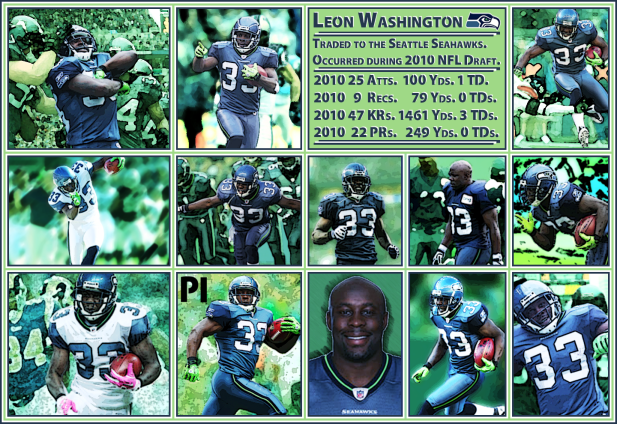 Announcement : Hello, my name is Max Strauss with http://prointerviews.org/, http://facebook.com/ProInterviews/, and http://twitter.com/ProInterviews/, and http://youtube.com/user/ProInterviews/. Please join all those, and become a part of ProInterviews. I’d like to welcome you to the interview with Leon Washington. Leon was a star at Florida State University for four years. He was drafted in the 4th round, by the New York Jets in the 2006 NFL Draft. He played with the New York Jets for the first four years of his career. He made the All-Pro and Pro Bowl team in 2008. However, he was traded during the 2010 NFL Draft to the Seattle Seahawks and has become their return specialist and situational running back. Before we get started with the interview, let’s listen to both audio clips from the game against the Chargers earlier the season. Then, we’ll get started with the interview! I Hope you enjoy the collages also!

Leon Washington Audio Clip 02 : And Washington will return this one from the one. Washington slowed down as he crosses the 20. And, stays on his feet, Leon Washington’s off to the races once again. Does he have the closing speed? Leon Washington is gone. Touchdown! 99 Yards! His second of the day!

Strauss : So, have you ever thought about joining twitter?

Washington : No. My wife has one. I never really thought about it. I have a Facebook page and I got on Facebook when it first came out when I was in college. So, it’s like, I know of it, and a bunch of players on it. I kind of like FaceBook… I might get on twitter one day, but I’ve never really thought about it. I might get on twitter but I don’t see players making posts once or twice a day, but it takes time, and I would probably only post once or twice a day.

Strauss :  How long have you played football?

Washington : Organized football I started when I was ten years old. Since then, so eighteen years now.

Strauss : So, did you play any other sports in high school?

Strauss :  Do you have a favorite memory from any high school sport?

Washington : I would say baseball. My high school team was really bad. In my junior year, we went like 5 and 21 during the regular season. In Florida, everyone had a chance to go to a district tournament. and we ended up number 14 in the state, and winning the district championship. So, we were really bad. It was a huge upset to win the district championship! So, that was my favorite sports moment in high school.

Strauss : So, what was the transition like from high school to FSU?

Washington : For me, I think, that on the football field, playing football was a little different because the players were bigger and faster and stronger. College-wise, you had many responsibilities. You had to go to class, and you had to get up. It was a big challenge for me to be on my own and not having my mom and dad with me. So, that was the biggest challenge.

Strauss : Did you have a best friend at FSU?

Washington : Marc Simon. He was also my roommate, and the little league football quarterback. We were playing together since ten years old.

Strauss : Do you have a favorite memory from FSU?

Washington : A bunch of them. I would say my freshman year. I had a great game against University of Florida. I think I had two touchdowns, and 120 something, yards rushing. I think that would be my favorite moment. I would also say the whole college football atmosphere in Tallahassee at Florida State. I think we have the best college atmosphere of any football team in college.

Strauss : So, what about off the field, do you have a favorite memory?

Washington : I would say, Bobby Bowden’s Friday Speeches, and then we would play on Saturday. Bobby Bowden’s speeches are what got me through college, friday before the game.

Strauss : So, now going into professional, what was the most important thing you learned at FSU that helped you the most in the NFL?

Washington :  I think, becoming a better competitor. I think at FSU, some of the guys that generally were going to go to the National Football League. And, The competition helped me though.

Strauss : What is it hard to choose FSU? Did you have any other options?

Washington : Yeah, it was hard. I grew up a Gator fan. And, when I was coming out, Steve Spurrier was leaving. I wasn’t a big fan of their new coach, and then, I had fallen in love with Florida State.

Strauss : What was your whole draft day experience like?

Washington : I knew I was going to get drafted in the third or fourth round. So, I got drafted on the second day. I was with my family and friends, we had a lot of people chilling at the house. We didn’t do much. We just put the draft on pretty much.

Washington : First of all, I was like, ‘Wow, man! I grew up in Florida, I have a chance to go to New York. I was very excited about that.’ At the time, I get a chance to pick up some things from Curtis Martin, and it was really great. Really, really great actually.

Strauss : Now, you get drafted by the Jets, what was your first training camp like?

Washington : It was tough. The NFL is different… a lot of responsibility. It was tough to get in because the days get really long. And, we would have to focus in everyday. I had a tough time adjusting to that part of it. But after what I had gone through, it was tough. The mental aspect of the game was tough.

Strauss : What’s your favorite memory in the Jets?

Washington : It had to be that Miami game in 2006. We’re trying to get to the playoffs and I took a screen down there and got us down in field goal range. That is probably my best memory.

Strauss : What was the transition like from the Jets to the Seahawks?

Strauss : So, what’s your favorite kickoff return ever, and can you take me through the play.

Washington : Oh Man, favorite kick off return ever…  I would probably say my first one with the Seahawks because there were so many great blocks on the play. When I caught the ball, I followed my lane, I see the hole, and Michael Robinson, the fullback, made a great block, and made sure to finish him off at the end. I did a great job of just going up and hitting the hole really fast. I made the kicker miss, and I just remember scoring the touchdown. That feeling… it was the loudest I ever have heard in a football stadium. I got to say that was my most favorite moment, I’ve had a bunch of kickoff returns, but that was a little different.

Strauss : Do you have a favorite punt return ever?

Washington : Yeah, I had one in Pittsburgh, I think in 2007. I ran one back to set up a field goal, in overtime. We  ended up winning the game. So, that would be it.

Washington : Well, first of all, I pride myself on being a football player. Speaking of pride, I have pride in putting good film on tape. I don’t want anyone looking at me and going, ‘Hey, he’s a sucker. He’s not trying hard.” I got a lot of pride in what I do. I want to be the best in what I do. And, secondly, if you’re a player, if you give Special Teams a chance, it could impact as the offensive and defensive plays. As much as a touchdown or an interception, you have a chance to change the game immediately. You also have a chance to regain momentum mentally. So, of all the plays, we can catch everyone’s attention by making a big play.

Strauss :  Who’s had the most impact on your career?

Washington : That’s a tough question, I’ve had so much help. I can’t pick out one person. So, honestly, I would say my faith in God. That right there is the truth, because often, I had a lot of tough times in my career. I kept my faith and trust in him, and it made me better.

Strauss : What is your favorite thing to do in your spare time not related to football?

Washington : Well, I have two little boys. So, I play with my boys when they get home. That’s what I do.

Strauss : So, do you have a nickname?

Washington : Some of the guys on Seattle call me, Jet Lee. I don’t know. I think when I return I had the Jets turned on, I was so fast, so they kept calling me Jet Lee.

Strauss : Have you ever thought about starting a foundation or charity?

Washington : I have, but I am little young. Even though I don’t have a foundation, I spend most of my time helping other foundations. Every year, I do a football camp. I host it in Connecticut every year.

Strauss : What’s an experience that changed your life?

Washington : I would say me breaking my leg, was a pretty bad experience. Not only was I called for not playing football, I was called that I would have to learn how to walk again, and that helped me appreciate the really small things in life.

Strauss : So, if you could describe yourself as any ice cream flavor, what would you be and why?

Washington : Ice cream flavor… It would probably be caramel!

Strauss : What is your favorite quote?

Washington :  I think Barry Sanders said, “To be what you’re not, you must do the things that others don’t want to do.”

Strauss :  For someone aspiring to play football in the NFL, do you have any advice for them?

Washington : To play in the National Football League, I would tell them that the best advice would be.. that quote. That’s what I just said. You definitely have to work hard. The NFL is not about the most talented person, I’m telling you. It’s for the guy that works the hardest.

Strauss : Thank you so much for your time Leon!

Washington : No problem dude, I want you to continue what you’re doing. Hit me up when you put it online!

-> Here are the personal questions he answered. <-

Washington : If I wasn’t playing in the National Football League, I would probably be a biologist. I love everything about nature and everything about biology. I’m a big National Geographic / Discovery Channel fan. I love learning and study about the foundation of life. Something like that.

Strauss : What is your favorite movie?

Washington : Oh… Hm, I would probably say Shawshank Redemption. I like that long, settled down type of movie.

Washington : Not pie, but cake, I love carrot cake.

Strauss : What would your last meal on earth be?

Washington : It would be… my wife’s Honey Baked Mustard Chicken. With a bottle of water or something.