Phillip Daniels played college football at the University of Georgia. He entered the 1996 NFL Draft, and was selected by the Seattle Seahawks in the fourth round. He played for the Seahawks for four years, and then, for the Chicago Bears for four years. He signed with the Washington Redskins after that though, and was known for his pass rush ability and his special teams play. This interview was conducted as the 2010 NFL season was coming to an end. [UPDATE: PD is now the Washington Redskins’ Director of Player Development.] 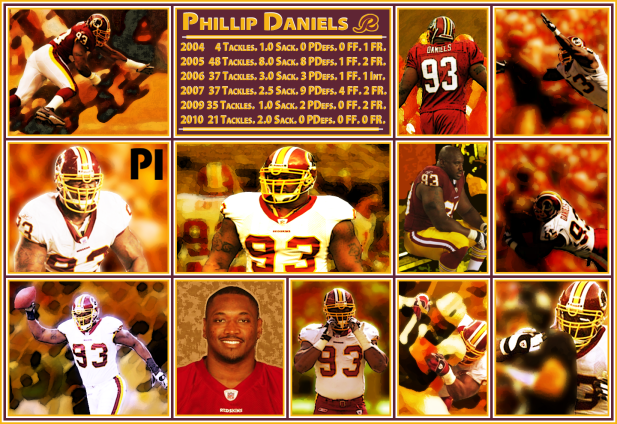 Announcement : Hello, my name is Max Strauss with https://prointerviews.org/, http://facebook.com/ProInterviews/, and http://twitter.com/ProInterviews/. I’d like to welcome you to the interview with Phillip Daniels. Phillip Daniels was a star at the University of Georgia, and became the 99th overall pick by the Seattle Seahawks in the 1996 NFL Draft. He played for the Seahawks for four seasons, (1996 to 1999) and accumulated 22 sacks and forced five fumbles. He then, signed with the Chicago Bears and in four seasons, he had 23 sacks and forced 4 fumbles. In 2004, he signed with the Washington Redskins and has remained with them since. So far, he has collected 16.5 sacks and 1 interception, and also forced 6 fumbles with them. He has over 500 tackles in his career, almost 50 pass deflections, 12 fumble recoveries, and 15 forced fumbles. Anyways, Let’s get started with the interview. But just like last time, here are some audio clips from his more recent career first!

Phillip Daniels Audio Clip 01 : Well, this is like a P.A.T. for Brown, right down the middle, 21 yards away… It’s BLOCKED! It’s blocked by one of the Redskins. Phillip Daniels gets a hand on it!

Phillip Daniels Audio Clip 02 : Rodgers in the shotgun, right off the bat. Has Jackson goes right, takes a step, looks right, looking over the middle, he’s going to get hit, sacked. Redskins crunch him. Second sack of the game. Redskins’ Phillip Daniels first man there. So, “Big Phil” get the sack!

Daniels : Just to talk to the fans, and to have fun with my teammates. Stuff like that. It’s also a good site to keep track of what’s going on in the league. You got all these analysts and everybody out there, going through their routine, so it’s good to keep up, so I know what’s going on.

Strauss : Do you connect with your fans any other ways?

Daniels : Well, other than going to the fan sites to talk to them, they ask me questions. I ask them questions. I did that before the season started, and I’ll probably go on again.

Strauss : So, how long have you played football?

Daniels : I started in sixth grade. Let’s count that up man, it’s been a long time. Add fifteen to eleven [26 years]. I guess it’s just a lot of wear and tear right there.

Strauss :  Did you play any other sports in high school?

Daniels : Yeah, I played basketball. And, I played baseball from sixth grade until my senior year in high school.

Strauss :  Did you have a favorite memory playing basketball?

Daniels : Basketball, I guess, going to the final four, two years in a row. My parents and my brother and my cousins, pretty much all my relatives. It must have been the fondest memory I have of basketball. That would probably be my best memory.

Strauss : Do you have a favorite memory from playing football at Georgia?

Daniels : I don’t think I do. I’m trying to think of one. I remember when Lee intercepted the ball, the first play of the game, and ran it back for a touchdown. I think it was the quickest score in Georgia history. I don’t know if it still stands, but it was at the time.

Strauss : Did you learn anything at Georgia that helped you the most in the NFL?

Daniels : No, just about the game. In high school, you learn a little bit of plays and in college, you learn a lot. I think when you get to college, you finally realize that there’s another side to the game too. You have to… use a schedule, get homework done everyday, go to practice everyday. I think it just teaches you discipline by coming to work everyday.

Strauss : More into the NFL, what was your whole draft day experience like?

Daniels : It was crazy man! I thought I was going to get drafted on the first day. That first day, everything was just a might go second, might go third. In the third, Miami ended up calling me, they were moving down. Atlanta called in the third round, they said they were going to take me. They ended up taking Shannon Brown, so they didn’t take me the first day. So, the first day was gone. Then, the second day came, and I think that was a long day for me because we had a party and everybody was in the house got drafted the first day. And, then my agent said that you’re going to get drafted early tomorrow, and my name came up on ESPN as the best bet. So, I was happy with that, and, the next day, he said that all on my clients on the East Coast called and then, Seattle called. They were fourteenth in the fourth round. But they called, I take the opportunity, and in the first preseason game, we played Atlanta, and I got two sacks. It worked out in my favor.

Strauss : Besides the preseason game, do you have another favorite memory with Seattle?

Daniels : No, I really don’t have one. Probably just making the playoffs. We did a bunch of stuff. We needed to beat Oakland to get in, and it didn’t matter how. It was up to a field goal. I was waiting for the field goal, and they missed the field goal, and we made the playoffs. Other than that, in Seattle, it was playing against the Jets. Quarterback didn’t cross the goal line, and they gave him a touchdown, and they showed the replay. And, that one started calling for the replays in that game. I remember that. So, there are things I remember.

Strauss : What was it like to go from the Seahawks to the Bears?

Daniels : For me because I was on Seattle for four years, kinda sad they didn’t keep me around. Coach Holmgren felt after the last season I had there, he said he wanted to build this defense around me, and then Chicago came and they gave me a good offer. Seattle did not want to match it, so I think I was more sad then anything that I was leaving behind guys like Michael Sinclair and friends. But at the same time, I knew that I had to move on, and make the most of the opportunity.

Strauss : Do you have a favorite memory from playing with the Bears?

Daniels : Yeah, our thirteen and three season. A lot of memories from that season. Mark Brown intercepted the ball in back-to-back weekends to win in overtime. I’ve been through a lot. We had to win during home-field game to get to the playoffs to play at Seattle. It was a lot of memories that year, and a whole lot happened that year. That was the same year as 9/11, so a lot was happening that year.

Strauss : What was the transition like form the Bears to the Redskins?

Daniels : That transition was pretty easy because Greg Blache in Chicago with me, he was the defensive coordinator of Chicago and then, he came here and the defense was similar. So, it was an easy transition for me to come from the Bears to here. So, was Coach Maxwell, he was a great coach. He was here, and I was one of the first free agents that he wanted. It was actually okay, and the transition was not bad at all.

Daniels : I think because of the way I work in the offseason. I don’t take a whole lot of time off. I just take about two weeks off. Then, I start working out, getting back in shape. It’s the offseason, and throughout the offseason, I stay in great shape. I think this helps me stay in the league a lot longer. Most players take about three months off, and then start lifting to get ready for the next season. I’m already three months ahead of them. It’s doing the right things also. Working hard through all the days and eating right has kept me around.

Strauss : Who has had the most impact on your career?

Daniels : Probably my wife. She’s the only one who has basically been to all the games. So, I would say my wife.

Strauss : Do you have a nickname?

Daniels : Some people call me, “Big Phil”. And then, I got a couple guys who call me “Field Goal.” I find that funny, but whatever. Big Phil is the one that works better.

Strauss : Why’d they call you that?

Daniels : It’s because I’m big, man. I got these muscles right here. I got big guns, so they call me, “Big Phil”,

Strauss : And, what about “Field Goal?”

Daniels : I don’t know where that came from. That came from like some guy in Seattle. They used to call me that in Seattle every now and then, because of my name, and putting something together.

Strauss : So, what’s it like to have your son commit to playing football at Notre Dame?

Daniels : It’s great man! I just went to one of his games this weekend, watched him play. He had a great game. It’s great to get the opportunity to go somewhere that’s a good school, continue his education, and play football. You can’t beat that. He went through a lot, but he’s dedicated. He didn’t sit around, he worked, and tried to make a name for himself, and I’m glad Notre Dame is giving him an opportunity to show them what he has.

Strauss : Off the field, you’ve been a finalist for numerous awards, do you have a charity?

Daniels : I don’t. But, I’m involved in everyone else’s.

Strauss : So, what’s your favorite charity?

Daniels : So, it would be a combination of Chocolate, Vanilla, Strawberry. Haha. I bring a lot to the team.

Strauss : For someone aspiring to play football in the NFL, what’s the best advice you can give them?

Strauss : So, is there anything you want to tell Redskins fans that we have not talked about?

Strauss : Thank you so much for your time.

Strauss : Good luck for the rest of the season.

Daniels : Alright man. I appreciate it.

Strauss : If you could meet anyone in the world, who would it be and why?

Daniels : I guess Bill Gates. He’s got a lot of money, so I just want to see how he lives everyday life.

Daniels : I probably followed Michael Jordan when I was younger. But, if I were to stick with football, I’d say Bo Jackson.

Daniels : My favorite TV show would be Martin. He’s a comedian, and he’s really funny on the show, so that’s what I would say.

Daniels : Sweet Potato Pie. My mom used to make it every holiday.

Strauss : What would be your last meal on earth?

Daniels : Fried Chicken or Sushi. Either one would be good.