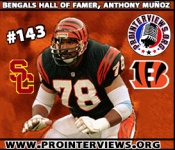 With the 3rd pick in 1980, the Bengals took a risk, selecting Anthony Muñoz. Considered a risk because Muñoz only played sixteen games in his entire career at Southern California. However, for the Bengals, it turned out to be the greatest pick they have ever made. After 185 games in his NFL career, Munoz became the first player in Bengals History to be inducted into the Pro Football Hall of Fame in 1998. In our exclusive interview, he discusses a variety of topics.

Click here to download the audio interview with Anthony Munoz, or scroll down below to read our interview.

Max Strauss : You had a long career in the NFL, and a great career too. Do you think you had a turning point in your career either in high school or in college, that you learned through your work ethic helped separate yourself from the rest of the competition?

Anthony Muñoz : A lot of people don’t realize that during my three years at University of Southern California, I had three knee operations. I only played one full season there. I spent three years at USC rehabilitating my knees after surgery. I think that was a turning point, definitely physically as well as mentally. I think physically, I really understood what it meant to work out, but I didn’t get it after until I started rehabbing and getting myself back every year after the knee operations.

The rehabilitation, the cardio workouts, the weight training all became more important after that. It wasn’t just ‘You’re a football player, you need to know football technique.’ No. I had to know the technical aspect and the strength and conditioning too. It became a physical as well as a mental understanding that the game of football could be taken away with one play. It was also really being appreciative and not taking things for granted.

That was the kind of attitude I took when the Bengals drafted me, even though I was drafted with a high draft pick. It didn’t matter that I was the number 3 pick, I had the approach that I would work harder than anybody, that I had to work everyday, and it didn’t matter if it was my first or second year, or my tenth or eleventh, I would try to out-work everybody. It was from those days in college that really made me appreciate and made me understand what I had to do to perform on a high level.

Strauss : Is there someone who stands out in your mind as someone who helped you with your work ethic and your motivation?

Muñoz : I think it was the whole kind-of structure when I was there. John Robinson was my head coach. Hudson Houck was my offensive line coach. Every coach on the staff had the demeanor of our program was. The told us that we were going to out-physically play people and out-work people. Along with what I had to go through, it was the whole attitude of our program at the time as a member of the USC football team. I have to say the coaching staff at Southern Cal were very instrumental on fostering that whole attitude. In addition, one of my best friends there, was Jack Ward, the Athletic Trainer, since I spent so much time in the training room with him. But, it was the whole team, and when teams are successful, it takes everyone from the coaches, the players, the trainers, the doctors, and the equipment people.

Strauss : You had a long career in the NFL, and there’s a saying “You’re only one play away from not playing the next down.” What’s something that you took away from your time in the NFL that you could share with younger players working their way in the league?

Muñoz : Don’t believe its deserved. Don’t believe its entitlement. But, believe it’s a privilege. Believe that you have to earn your position every single day, every single game, and every single year. You can’t put it in cruise control once you make the team. It is just like anything else, being a husband, a father, a businessman, you have to stay on top of things and make sure that you continue to remain teachable and coachable. Another thing I say is to remain hungry.  I played with a lot of guys who remained hungry early in their career and late in their career.

Strauss : Who do you think was the toughest defender that you faced when you were playing?

Muñoz : I could give you a whole list of them. Playing Left Tackle for thirteen years, every week was tough from  Bruce Smith to Fred Dean to Lee Roy Selmon. I could just go on and on right now. Those were just the defensive lineman that I faced. And as for linebackers, it was Clay Matthews, Jr., Derrick Thomas, Lawrence Taylor, and Rufus Porter.

Strauss : Watching the game now, there’s a whole different level physicality to the game due to the rules and everything. Do you have any thoughts on that?

Muñoz : I still believe it’s a great game. I still believe it’s the most physical game. Even with so much being made about what’s going on in the game, I think it can still be played very physically. It’s just this whole thing with launching with the helmet is unnecessary. If you are still technically sound and technically taught what you have to do, it can still be a physical game. There is no question about it that the physical soil on the body is still there, maybe even more because of the size, strength, and the speed of guys.

I think football is the greatest team sport and it will still be around. I think it rests on those that are teaching the game to really, not only teach the game, but make sure that they take control of their players and are taught technically sound technique. I know its a concern, and it should be one. I see guys that I played with, and guys that played before me, and they are affected by the game. It’s one of those things that it is a problem, but I think the game will continue to strive.

Strauss : Just to single out one player today… Since you’re a Bengal, I’m going to single out Geno Atkins (Follow @GenoSacks). What do you think he brings today to this young Bengals team?

Muñoz : I just think he is in a class of his own. If he’s not the top, I think he’s one of the top defensive tackles in the league and he just does a tremendous job on the line. And, his work ethic too. When you get a guy who is not only a great player, but also works as hard as he does, and from what I understand, he is an excellent person, that brings a lot to a team.

Strauss : Back in the day, in your prime, how do you think you would fare blocking him?

Muñoz : It’s hard to say, but it’s a challenge I would have loved to have taken on. When you’re playing the game, you want to take your talents against the best. Even though he’s an inside player, and I was facing defensive ends, it’s always a challenge to try and block someone that’s different then what you’re used to. He is a defensive tackle and it is completely different inside, but I would have loved the challenge.

Strauss : Now transitioning to life after football. You’ve been a veteran for a while now. Is there any advice you didn’t get when you finally retired that you would have liked to receive or ?

Muñoz : I think one of the things that I have done with my foundation, compared to my business: ‘When you put your name on something, you have to be totally engaged and know exactly what’s going on everyday.’ I’ve done that with the foundation for 11-12 years, and I’m just starting to do that in business. If you ever put your name on something, you need to be involved in the everyday operations and know what’s going on.

I would highly recommend that to the younger guys especially because I did not do a foundation when I was playing. I really believe that I couldn’t have done what I’m doing now with the foundation while I was playing because it is too time consuming to be that engaged. I was a husband, a father, and playing the game, and to be engaged in the foundation, I’m sure I would have been able to make time for it, but it would have been difficult. But now, as a retired player, I’m there all the time, and I’m totally engaged.

The piece of advice I would give to young guys: Know what’s going on and be engaged.

Strauss : Tell me about the Muñoz Foundation Follow @MunozFoundation and what you have accomplished in the 11-12 years that you guys have been around…

Muñoz : Our mission statement is to impact kids mentally, physically, and spiritually. We do programs. We don’t do any allocations of funds. Our staff puts together programs. The way I talk about is education, character, and leadership. For elementary kids, we do a one-on-one mentoring program. For middle school kids, we do overnight character camps. For high school kids, we do a leadership seminar. Then, we give out 23 scholarships every year.

Strauss : In your time doing all of this positive work for the community, is there something that you would single out as one of your favorite memories doing this?

Muñoz : Definitely. Through the scholarship fund that we have, I enjoy seeing the college graduates or students that we are assisting in college to come back and volunteer at our events. To me, those are the young people that get it. They’re being helped, but they’re also coming back and helping. Those are the memories that I have going to our events and seeing the handful of the college students coming back and helping. We even had one of our scholarship students who made a pretty good size donation at an early age. Those are the types of things you enjoy seeing.

Strauss : Time for what is becoming our signature question… If you could describe yourself as any ice cream flavor, what would you be and why?

Muñoz (Uncut) : (Laughs) That’s a good one. I would probably have to say rainbow sherbet because I believe I am pretty diverse and I am involved with a pretty diverse group of people. I think that is important for society that we interact with people who are different from ourselves and that we get to know people that are different from our own culture. I look at rainbow sherbet or just rainbow ice cream, and you have different colors in it.

Strauss : Thank you so much for your time.

Muñoz : I really appreciate the opportunity to talk football, but also to talk about the foundation.