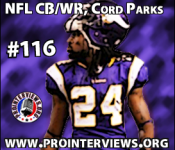 Cord Parks played college football at Northeastern University. He totaled 171 tackles and 12 pass deflections throughout his collegiate carer. He also participated and ran track at Northeastern too. He entered the 2009 NFL Draft, but went undrafted. He signed with the St. Louis Rams. He has been a member of the Seattle Seahawks and Minnesota Vikings also. In the end of 2011, he signed with the New Orleans Saints. 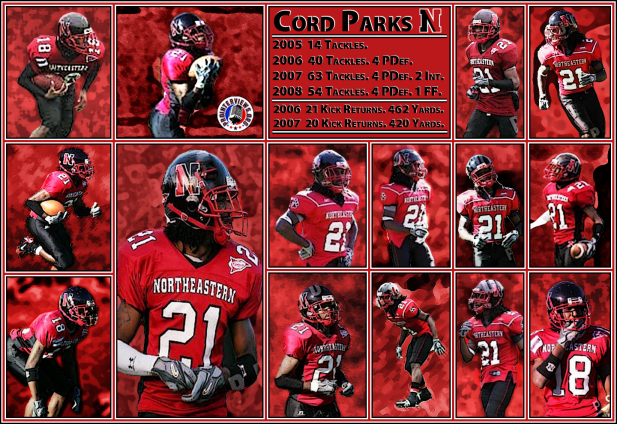 Strauss : How do you connect with your fans?

Parks : I think I’m able to connect with the fans from being a fan myself I love this game and it’s a complete blessing to be able to do this what I love on an everyday basis. I am also just able to connect with my fans because they have followed and supported me from the beginning even during my town of team switches they have always been there to keep me going

Strauss : What was it like for you playing youth football?

Parks : My youth experience helped me to build my drive and dedication to this game. I played in the GYFC (Georgia Youth Football Conference) and during that time, it was the best conference in Georgia, but something people don’t really know is that during this time I only played running back. I had the best time winning three championships, but that’s where I learned everything like hard work and dedication. Not only that, but two of my teammates are in the NFL also, Patriots Jermaine Cunningham and Bills Kelvin Sheppard made our team a pretty tough team to play.

Parks : As a high school player, I was able to start and have a key role on varsity as a freshman playing getting a significant time playing but my breakthrough came through my sophomore year when I became a starter playing running back and defensive back. My junior  and senior year, I was the captain of my team. During my senior year, we led our team to our first playoff appearance in five years.

Strauss : What was your recruiting experience like to Northeastern?

Parks : Although there were slight adjustments due to the fact that I was from the south and now living and going to school in Boston, a lot of my teammates were from the south. In a sense, I felt like I was at home.

Strauss : What’s it like to be the last player in school history to make it in the NFL for probably a while?

Parks : It’s bitter sweet because on one hand, I know I have to leave an outstanding impression to show that I deserve to be where I am. However, on the other hand, I know that I won’t be able to share this great opportunity with any teammates from Northeastern that may have come after me.

Strauss : What was it like being a multi-sport athlete in college?

Parks : It kept my busy.  Not only was I a multiple sport athlete, but I was also a mechanical engineering major and that made it a bit difficult. I quickly had to learn to manage my time, but was able to succeed once I learned time management skills.

Parks : I had a pro day during my junior year. I ran a 4.39 and at the time we didn’t do any other drill, we just ran 40s and took my height weight and other basic information.

Strauss : Even though you were undrafted, what was your draft day experience like?

Parks : It was disappointing at first.  Because I didn’t have a senior pro day my draft stock dropped tremendously.  It was rough for me to watch my friends and guys that I competed and did well against, get drafted.  However, my disappointment was short-lived because fifteen minutes after the draft was over, I received a call from the St. Louis Rams and they offered me an undrafted free agent spot.

Strauss : What was it like receiving a phone call from the Rams?

Parks : No words can explain how excited I was to get the phone call from the St. Louis Rams. However, it didn’t really hit me until I saw my name in the locker room and I began practicing with guys. I had seen my play and watched on TV time and time again. I chose the Rams because it was the only team that offered me a shot.  In fact, you can say that I didn’t choose the Rams, the Rams chose me.

Parks : It was a great experience. It was a chance for me to go the Northwest.  The coaching staff as well as the facilities was great.  I was enthused to play with Pete Carroll.  Additionally, the players and I connected on and off the field, more specifically the defensive backs.

Parks : My time spent with the Vikings were some of my best years.  I was able to play with and learn from players like Antoine Winfield, Adrian Peterson and Brett Favre.  I was able to learn a lot more about the game.  Additionally, the coaching staff was great.   There were coaches who have played in the NFL so they were able to relate to us players pretty well.  The player to coach relationships that developed as a result made for a smooth transition.

Strauss : What is your favorite memory in the NFL?

Parks : Up to this point, my favorite moment in the NFL would have to be my first active game when I was with the St. Louis Rams.  We played the Cardinals on Christmas and on my first play, I made a tackle.  It was exciting and I felt proud.

Parks : Oreo and M&M Blizzard because I’m the best of both worlds. Candy and Ice Cream are similar to me because I’ve played both sides of the ball, both offense and defense. The M&M blizzard is smooth, that’s my offense side and when I have the ball. Oreo Blizzard is rough like when I’m on defense.

Strauss : For someone aspiring to play football in the NFL, do you have any advice for them?

Parks : Most people try to look so far ahead and focus on things that have not happened yet.  My advice would be to enjoy your time in the present and take care of the business that is in front of you at the moment.  I would also say that working hard is a must.

Strauss : Thank you for taking the time to answer these questions.

Parks : No problem. I’m happy that I could help!

->Here are the personal questions that Cord Parks answered.<-

Parks : Andre 3000 is one of my favorite artists and it has been this way since I was a kid.

Parks : Barry Sanders and Walter Payton because they were dynamic and explosive players when they had the ball in their hands.

Strauss : What would be your last meal on earth?

Strauss : Do you have a special pre-game ritual?

Parks : I usually make me a playlist that I listen to before every game I also like to get to the stadium early and just walk around the field a few times.