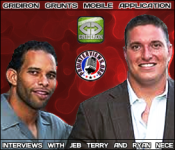 Former NFL teammates, offensive lineman, Jeb Terry and linebacker, Ryan Nece developed an iPhone and Android application called ‘Gridiron Grunts’. Basically, players go on and grunt their thoughts through short audio recordings. It’s a pretty awesome application and you can download it at this link here, www.bit.ly/progrunts. Fans can subscribe to different players’ feeds and add friends onto their own network to communicate with their friends and their favorite players. Check out the interviews with the co-founders!
Click here to download the free iPhone app.

People spend time questioning the authenticity of players’ tweets and Facebook posts. Is it really them or is it their marketing team? How can a fan take the guessing and wondering out of this situation? Simple. With a new iPhone and Android app called, Gridiron Grunts, NFL players record audio messages or ‘Grunts’ to their feed. Fans can then subscribe to these feeds, and can listen and/or download the audio messages as ringtones.

Jeb Terry and Ryan Nece are both behind the scenes running Gridiron Grunts. They should be your first “adds” on the app because they are a free subscription. Neither of them could tell me how they met, but both of them had a great friendship on and off the field together while they both played for the Tampa Bay Buccaneers. Jeb Terry was an offensive lineman from the University of North Carolina and played in Tampa Bay from 2004 through 2007. Nece was a linebacker out of University of California and played in Tampa Bay from 2002 through 2007, winning the Super Bowl championship during his rookie campaign.

As recalls it, the idea for the app was started when Jeb Terry learned about people monetizing a quarterback’s cadence as a ringtone. “That got the ball rolling,” Terry recalls. Terry wanted to make this more of a communication platform because the regular players don’t get the media attention. We wanted to give players more control of their own content.

“We built Gridiron Grunts to allow athletes to control their brand. A lot of the content that is out there about them is what they want their fans to hear. In some places, players’ content will be cut up and spread all across the internet without any control of where it’s going and who’s listening to it, and they’re not being compensated for it. We built this platform so a player can seamlessly integrate their thoughts day to day and send out the content straight to the fans themselves.” says Jeb Terry. Ryan Nece also emphasized the fact that, “Players can truly connect to the fans that’s its them by using their voice.”

“The cool thing is that if you’re tailgating, and you’re at a game, and all of a sudden your phone lights up, and it says, ‘Philip Rivers just grunted. Do you want to listen to it?’ And, I’m in the stands, and it’s him maybe saying, ‘Hey, what’s up fans? We need you at the stadium today. We need you to be loud.’ That’s the kind-of experience we’re trying to create.”

“The app is free to download, and you can make a profile and grunt with other fans and friends for free. It doesn’t take up any of your phone minutes either.” says Terry. However, communicating with players is based on a small subscription fee. Some of the most intriguing players on the app are Vontae Davis, Ryan Kerrigan, Jamaal Charles, Phillip Rivers, Jason Witten, BJ Raji, Earl Thomas, Christian Ponder, Chris Johnson, DeAngelo Williams, Kyle Orton, Sean Weatherspoon, and Wes Welker. The list continues to grow, and the fans support for the app keeps growing daily as well. For a full list of players, check out http://gridirongrunts.com/grunts-roster.

The subscription to the 30 players’ feeds is only $4.99 per month, and to subscribe to an individual feed is only $0.99 per month. This price isn’t costly, but it allows fans the ability to grunt to the players, and save different grunts as ringtones. You can see how much a player has grunted before you sign up for the subscription, so you know what you’re going to be getting into. Every player has some free audio messages, but to unlock all of them that’s why there’s a fee.

When asked about the growth of the app, “The app has continued to grow ever since the launch. We launched the app on the night on the NFL Draft. We are also officially licensed by the NFL Players Union and have their full support. We’re thrilled about that relationship going forward. We’re looking forward to growing our fan-base as well as growing the amount of players.” Terry tagged on. The solid growth and number of players that use it may make your five dollar monthly investment one of the best things about this 2011 football season.

The 2011 season without Gridiron Grunts would be a risk for all true fans of the game. Nece said that the most important thing Gridiron Grunts brings to the market, is, “It’s authenticity. It’s information directly from the source and in real-time. Maybe you can tune into ESPN or a radio interview, but there are very few places that you can hear rich, insightful content from an athlete without the player doing an interview and having to answer questions. Whatever the players want to ask questions about, they can. That’s what we’re excited about and that’s what fans are excited about.” Regardless of the amount of star players that are already on the app, the possibility of this true and verified authenticity from the players is almost endless.

But, what does the future hold for Gridiron Grunts? Terry says, “Fans will be allowed to join something called, ‘The Huddle’ and what that means is that to you can grunt and talk with other fans who are subscribed to the player’s feed.” Also adding,  “We are working on a feature where you can submit questions to the players, and then the players can answer your question and shout you out personally in the grunt.”

Gridiron Grunts was founded by two former professional football players, Ryan Nece and Jeb Terry. The app is calling all true fans of football who want more unique and exclusive content to sign up and register an account. When you do sign up, you’ll definitely experiment around, but definitely add me as a friend, and learn the power of grunting! What are you waiting for? Go on and GRUNT!