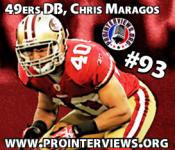 Chris Maragos first went to Western Michigan University to play college football, and then transferred to play at what he calls his dream school growing up, the University of Wisconsin. He went undrafted after the 2010 NFL Draft. He signed with the 49ers as a UDFA, and made the team’s practice squad in the 2010. He most recently signed with the Seattle Seahawks after being cut by the 49ers. This interview was conducted before the 2011 NFL season.