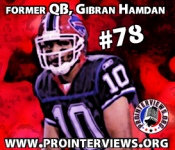 Gibran Hamdan played college football at Indiana University. He entered the 2003 NFL Draft and was drafted in the 7th round. He played in NFL Europe and also was a backup for many NFL teams such as the Redskins, Seahawks, 49ers, Bills. He ended his career with the CFL. He started his own clothing line called, ‘Alial Fital’ and he talks about it in our interview conducted in March of 2011.