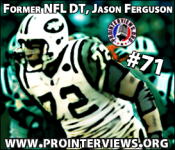 Jason Ferguson played college football at the University of Georgia. He entered the 1997 NFL Draft, and was selected in the 7th round. He played for the Jets for seven  years, the Cowboys for three years, and the Dolphins for two years. He was a great defensive lineman for all of the teams he played on. At the end of his career, he served as a mentor to Paul Soliai. This interview was conducted after the 2010 NFL season. He is currently no longer in the NFL. END_OF_DOCUMENT_TOKEN_TO_BE_REPLACED