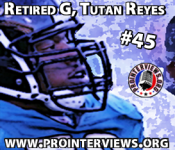 Tutan Reyes played on the offensive line at the University of Ole Miss. He entered the 2000 NFL Draft, and was selected in the 5th round by the New Orleans Saints. He played with the Saints from 2000-2002, and then, TR had a brief stint with the Tampa Bay Buccaneers in 2002. Then, Reyes signed with Carolina Panthers and played with them from 2002-2005, and after that he was with the Bills in 2006. He played for the Jaguars from 2007 through 2009, and then had two tryouts left with the Giants and the Texans but they didn’t seem to work out. Check out our interview that was conducted in the middle of the 2010 NFL season as he was retired.

Strauss : Why do you make it important to connect to the fans?

Reyes : Well… Twitter is the easiest way that I can connect with the public.  Everyone is on it. I don’t feel as if I’m bigger than anyone or untouchable so I guess its my way to reach the fans and people that support me.

Strauss : And, what was your favorite NFL team growing up?

Strauss : Who was your childhood star? Why?

Reyes : My childhood star was my mother.  She was the one that kept me on the right path and instilled values in me that I live by today. In terms of a sports figure it was Ricky Henderson.  He played outfield for the Yankees and was the fastest man in baseball.  I liked the confidence and swagger he brought to the game, and nobody could catch him stealing bases.

Reyes : If I wasn’t playing ball, and baseball didn’t work I would have wanted to be a businessman of some type.  I just knew if I wasn’t playing ball I would want to wear a suit. I always admired the people I saw going to work in a suit.  As a child I thought it was cool to have to get dressed up and look sharp just for work, haha.

Reyes : If I could meet anyone dead or alive I would want to meet Bill Gates.  I would want to know how he amassed and kept his wealth over the years.  We have the same birthday so I figure I have that potential in me as well haha.

Strauss : What is your favorite song to listen to before a game? What pumps you up?

Reyes : One of my favorite songs to listen to before a game Is Jay-Z “Do It Again (Put Ya Hands Up)” The intro lets me know rest time is over “5 Seconds Is Up…Let’s GOOO!”

Reyes : My favorite, hmmmmm, I’d say Scarface. But any gangster movie is good with me.

Strauss : What is your favorite snack food?

Strauss : What is your favorite TV-Show?

Strauss : What is your favorite meal?

Strauss : What is your favorite video game?

Reyes : My favorite video game would have to be Godfather.

Strauss : What is the one thing you can’t leave your house without?

Reyes : One thing I can’t leave my house without is my blackberry. Definitely need that…

Strauss : When did you see your first live NFL game?

Reyes : Ummm first live NFL game had to be my 1st pre-season game against the Jets.  I was on the Saints and we lost.  But it was cool because my 1st NFL game was in New York, and I had like 25 people there to see me play.

Strauss : How long have you played football?

Reyes : I’ve been playing football since I was at least seven. That’s as far as I can remember.  But organized ball, Pop-Warner, since I was 12.  I’ve been in the NFL for ten years.

Strauss : Did you play any other sports in high school?

Reyes : My favorite sport growing up was baseball. I thought I would play professionally.  My favorite experience was hitting 2 home runs in a game when I was twelve. It meant even more because my mother was there to see it.

Strauss : When did you realize that you were going to play football in college and in the NFL?

Reyes : I always believed I could play in college and professionally, but I guess I realized I had a chance to play in college in my sophomore year in high school. I had to be about 15. My high school coach said I could play at any college in the country if I focused and stayed committed.  I realized I could play in the NFL my senior year in college. My roommate and former Chicago Bear Terrance Metcalf was the one who drilled it in that I had a real shot at the NFL.  It meant a lot coming from him because I always thought he was a better lineman than I was.

Strauss : What is your favorite memory from Mississippi?

Reyes : My best memory would have had to be my last home game played, which was senior day.  At Ole Miss we walk through the Grove, which is a park, before the home games.  It’s a way to greet the fans before the game. I brought my son with me on the walk through the grove. He slept right through all the noise and cheering.  As the seniors were announced and they said my name, I held my son up for the world to see.  It was like the scene from Lion King haha. I was so proud to have a little man.

Strauss : Why did you choose the number at Mississippi?

Reyes : I chose 76 at Univ. of Mississippi because I moved from tight end to offensive line.  I wanted 77 because that was the year I was born. That number wasn’t available so I went with 76.  I loved it at the time.

Strauss : How has the number process working for you since you’ve been changing teams?

Reyes : The number process isn’t that important to me after 10 years in the NFL…

Strauss : What impact did your high school coach have on your college and professional career?

Reyes : His impact was that of a supporter and a father figure when I was in college.  He passed while I was in college and didn’t get a chance to physically see me reach my dream of playing in the NFL. I know he is proud though. He told me I could make any Division-1 College if I focused and he was right and some.