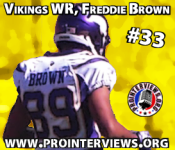 Freddie Brown played wide receiver for the University of Utah. He was very productive during his senior season accumulating 77 receptions, 900 yards, and 7 touchdowns. He entered the 2009 NFL Draft, and was selected 224th overall by the Cincinnati Bengals. He made the Bengals practice squad during his rookie season. This interview was conducted before the 2010 NFL season. [UPDATE: In 2010, he signed with the Minnesota Vikings 53-man roster.] END_OF_DOCUMENT_TOKEN_TO_BE_REPLACED