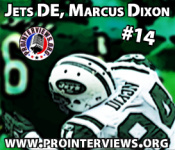 Marcus Dixon had a rough time growing up. He played for Pepperell High School, but due to a court case and his conviction, Marcus Dixon’s scholarship offers were revoked. After he was released because of his conviction was overturned, he enrolled and played football for Hampton University. After his completion of college, he entered the 2008 NFL Draft, but went undrafted. He signed with the Dallas Cowboys. He then signed with their practice squad and was a member in 2008 and 2009. [UPDATE: He just recently signed with the New York Jets.] END_OF_DOCUMENT_TOKEN_TO_BE_REPLACED