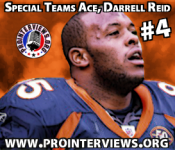 Darrell Reid attended the University of Minnesota and played in 48 games as a defensive tackle. He finished his career at Minnesota with 157 tackles, 16 sacks, 1 forced fumble, 2 fumble recoveries, and 6 pass deflections. He was undrafted in the 2005 NFL Draft, but signed with the Indianapolis Colts. He finished his career with the Colts with 62 special team tackles. He was with the Denver Broncos in 2009 and 2010. This interview was conducted before the 2010 regular season.