Legedu Naanee played college football at Boise State University, and he had seventy-two receptions and twelve touchdowns throughout his entire collegiate career. He entered the 2007 NFL Draft, and was selected in the 5th round, 172nd overall by the San Diego Chargers. He earned loads of playing time, and finished his time in San Diego with 746 yards and three TDs. In 2011, he signed with the Carolina Panthers and had his best season of his young career with forty-four receptions and 467 yards. He has started twenty games in his NFL career, but has played in 69 games. This interview was conducted as he was a free agent. [UPDATE: He is currently fighting for a roster spot on the Miami Dolphins.]

END_OF_DOCUMENT_TOKEN_TO_BE_REPLACED

Nick Bellore played college ball at Central Michigan. After going undrafted in 2011, he trained on his own throughout the entire NFL Lockout. He signed with the Jets for Training Camp and ended up making their final 53-man roster. He is one of their key Special Teamers, and totaled 19 tackles during his rookie season. Check out this interview was conducted after the 2011 NFL season.  END_OF_DOCUMENT_TOKEN_TO_BE_REPLACED 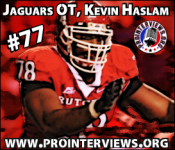 Kevin Haslam played college football at Rutgers University. He started 32 games throughout his collegiate career, and played in 43 games. He entered the 2010 NFL Draft, but went undrafted. He signed with the Jaguars and played in five games during his rookie season. Check out our interview that was conducted before the 2011 NFL season. [Update: He is now a member of the Oakland Raiders.]

END_OF_DOCUMENT_TOKEN_TO_BE_REPLACED

Demetrius Byrd played wide receiver for Louisiana State University. He first started playing at Pearl River Junior College and was a complete stud. He then played for LSU in 2008 and 2009 totaling over 1000 receiving yards, 11 touchdowns, and had 72 receptions. He entered the 2009 NFL Draft, but was selected in the 7th round by the San Diego Chargers. When he was drafted, he was in a coma after suffering a serious car accident. He signed with the San Diego Chargers, and was placed on the non-football injury reserve list. This interview was conducted before the 2010 NFL season. END_OF_DOCUMENT_TOKEN_TO_BE_REPLACED