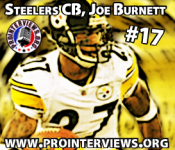 Joe Burnett played college football for the University of Central Florida. He played cornerback but also took over duties returning punts starting as a freshman and continuing throughout his senior season. He entered the 2009 NFL Draft, and was selected in the 5th round by the Pittsburgh Steelers. He played in the preseason with the Steelers and showed promise as a rookie. This interview was conducted before the 2010 NFL season. END_OF_DOCUMENT_TOKEN_TO_BE_REPLACED