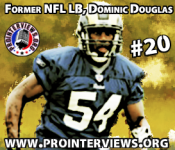 Dominic Douglas played college football for Mississippi State University. DD entered the 2009 NFL Draft, but actually went undrafted. He signed a UDFA contract with the St. Louis Rams after the draft. He made the practice squad player and remained there all year. He then was cut by the St. Louis Rams in 2010. This interview was conducted before the 2010 NFL season. END_OF_DOCUMENT_TOKEN_TO_BE_REPLACED