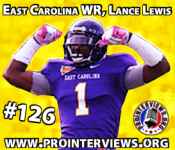 Lance Lewis played football at Concord High School in North Carolina. Afterwards, in 2007, he went to California to play at West Hills CC in California. In 2008, he did not play football. In 2009, he played at East Mississippi CC and led his team to an 11-1 record and to winning the school’s first ever MACJC Championship. He then went to East Carolina and in 22 career games (between two seasons), he served as ECU’s go-to receiver. He is entering the 2012 NFL Draft, and is projected as a sleeper in the wide receiver class.