D.J. Fluker is projected to be a first round draft pick by almost every NFL Draft Analyst. Fluker played at Alabama and was First-Team All SEC this past year after winning his third National Championship. He was a force that could not be reckoned with on Bama’s offensive line. There hasn’t been a stronger right tackle prospect in this year’s class. Look for his name to be called tonight, but first, check out our exclusive interview with him.

END_OF_DOCUMENT_TOKEN_TO_BE_REPLACED

Will Rackley played high school football with current Bills offensive lineman, Cordy Glenn. He decided to continue his collegiate career at Lehigh University. He is one of few players in the school’s history to start every game in the four years. He earned First-Team All-Patriot League honors three times in college. He was selected 76th overall by the Jacksonville Jaguars in the 2011 NFL Draft. Rackley was part of an offensive line that helped Maurice Jones-Drew lead the NFL in rushing in 2011. END_OF_DOCUMENT_TOKEN_TO_BE_REPLACED 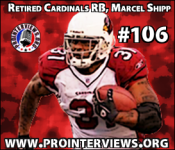 Marcel Shipp played for the University of Massachusetts and was an All-Atlantic 10 selection three times in his collegiate career. He then entered the 2011 NFL Draft, but went undrafted. He signed a UDFA contract with the Arizona Cardinals. MS was a member of the Arizona Cardinals from 2002 through 2007. More recently, he played in the UFL with the Las Vegas Locos. His best season came in 2003 when he played with Emmitt Smith in 2003. He totaled 830 yards on the ground and another 184 receiving. This interview was done in December of the 2011 NFL season.
END_OF_DOCUMENT_TOKEN_TO_BE_REPLACED

Bruce Miller played college football at the University of Central Florida. He was the Conference-USA Defensive Player of the Year for his phenomenal senior season. He entered the 2011 NFL Draft, and was drafted in the 7th round by the San Francisco 49ers. Coach Jim Harbaugh decided to switch him to fullback, and he talks about the adjustment. Check out our interview that was done in the early part of the 2011 NFL season.

Reed Doughty played college football at University of Northern Colorado where he was a teammate of Chargers WR, Vincent Jackson. He entered the 2006 NFL Draft and was drafted in the 6th round by the Washington Redskins. He is known as a great tackler and has almost 300 tackles in his NFL career. He was a teammate of Sean Taylor and shares his memories with him. Check out our interview that was conducted before the 2011 NFL season.
END_OF_DOCUMENT_TOKEN_TO_BE_REPLACED

Paul Soliai played college football at the University of Utah. He earned second team all-MWC for his performance in his senior season. He entered the 2007 NFL Draft, and was drafted in the 4th round by the Miami Dolphins. He has totaled 97 tackles, 5 pass deflections, 11 STFs, and 2 sacks throughout his career. He received the franchise tag after the 2010 NFL season. This interview was conduced right before the 2010 NFL season ended.

END_OF_DOCUMENT_TOKEN_TO_BE_REPLACED

Leonard Weaver played collegiately at Carson-Newman. He entered the 2005 NFL Draft, but went undrafted. He earned a spot from the Seattle Seahawks and was a member of their team and learned from all-time great fullback, Mack Strong. He was hurt during the 2006 NFL season, but played great in both the 2007 and 2008 seasons. He signed a contract in 2009 making him the highest paid fullback in NFL history. In 2009, he earned both All-Pro and Pro Bowl honors. Check out our interview as the 2010 NFL season was almost over. END_OF_DOCUMENT_TOKEN_TO_BE_REPLACED

Arthur Jones played on the defensive line for Syracuse University. He established himself as one of the best defensive lineman in Syracuse history. AJ entered the 2010 NFL Draft and was selected in the 5th round by the Baltimore Ravens. This interview was conducted before the 2010 NFL season, and actually some of these questions were asked and answered in person on his college campus. [UPDATE: He was on the Ravens practice squad during the 2010 NFL season.] END_OF_DOCUMENT_TOKEN_TO_BE_REPLACED 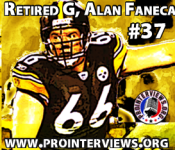 Alan Faneca played guard for three years at LSU. He left early after totaling over 200 pancakes before his senior season. He entered the 1998 NFL Draft, and was selected 24th overall by the Pittsburgh Steelers. He was 1st-team All Pro and a Pro Bowl selection every year from 2001 through 2007. He helped lead them to a Super Bowl victory, and had a key pull block that sprung Willie Parker to a 75-yard touchdown run. He was a Pro Bowler with the New York Jets in 2008 and 2009. He had a brief stint with the Arizona Cardinals. [UPDATE: He retired with nine All-Pro awards, nine Pro Bowl awards, and one Super Bowl title.] END_OF_DOCUMENT_TOKEN_TO_BE_REPLACED

Joe Burnett played college football for the University of Central Florida. He played cornerback but also took over duties returning punts starting as a freshman and continuing throughout his senior season. He entered the 2009 NFL Draft, and was selected in the 5th round by the Pittsburgh Steelers. He played in the preseason with the Steelers and showed promise as a rookie. This interview was conducted before the 2010 NFL season. END_OF_DOCUMENT_TOKEN_TO_BE_REPLACED