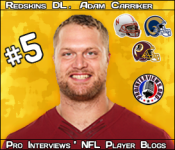 Adam Carriker committed to writing one last and final article for us all. With the 2012 NFL Draft coming up, Carriker thought it would be relevant to write an article about the NFL Draft, and his draft day experience. Back in 2007, Adam Carriker was a first round pick for the St. Louis Rams. It’s actually very interesting how he became a member of the St. Louis Rams.

Follow @AdamCarriker94 Follow @ProInterviews
Make sure you check out our interview for a background by clicking here.

Draft Day is something that athletes dream about their whole lives.

It is the culmination and reward for all the hard work that we have put in up to that point. It is also the beginning of becoming a professional athlete and your career that will follow. Many people think that after your last days of as a college athlete, all you do is train, run forties, do the 225-lb bench press, and prepare for the NFL Draft all in a couple of months. The truth is, an athlete starts preparing for Draft Day during their very first day of college. Up to that point, you have done the necessary things to get into college and really deciding which school to attend. But, from the first day of college, everything you do is gearing you up for your professional career. Whether that is using your degree in some way or continuing on as a pro athlete.

An athlete’s resumé in everything on tape. From your true freshman year to your last year, nothing is more important than what is on film! Also, the way an athlete treats people and their reputation as a person can either come back to haunt them in the Draft process or can be recognized as a positive thing. This all depends on individual character. This is anywhere from a three to five-year process during college, until you declare for the draft. So, it takes a long time.

The next step is the post college or so-called pre-draft process or, the various All-Star games, the Combine, interviews with teams, college Pro Day and flying around and visiting teams individually. Some guys have first round aspirations, some athletes just want to be drafted period or be on any team they can get one. It varies from athlete to athlete.

Here is my draft story: My first two years at Nebraska I spent trying to earn a starting defensive end spot. By my sophomore year, I had earned that spot. Going into my junior year, I was a returning starter and expectations grew. Four games into my junior year, I already had four sacks and I started to hear rumors about how I was going to declare early into the draft. Everyone kept asking me if I was going to leave early. To be completely honest with all of you, I hadn’t even thought about it for one second to that point. I decided to see how the year played out and then decide. I had a really good year, and then I took some time to make my mind up. I discussed it over with some trusted loved ones, and then I decided to go back to Nebraska for my senior year. I had another solid year as a senior. I had officially typed up and completed my resumé so-to-speak. The NFL now looked at me and they could analyze as they saw fit. I shortened my career at Nebraska down to one paragraph, but trust me, a lot of blood sweat and tears went into those years. Like I said before, your college tape is by far the most important thing to NFL talent evaluators.

After my last game, which was the Cotton Bowl, I traveled to Houston where I trained for my all-star game (I was invited to play in the Senior Bowl). I also trained for the combine and for my Pro Day. Workouts were twice a day for about two hours each. It was exhausting to say the least. Athletes are provided their meals, which are off course terrible in taste, but high in nutrients. I trained in Houston for three months.

During that time, I went to the Senior Bowl and I really helped my draft stock rise by playing well. The Senior Bowl consists of all the top seniors in college from the year before. They are divided into two teams. You practice against each other for a week, and then play the game on Saturday. The Senior Bowl practices are where the scouts really grade and analyze players. Practices are more important than the actual game as far as the scouts are concerned. Every night after practices, players spend a couple of hours meeting and being interviewed by various teams. They also do weigh-ins in front of everybody in nothing but your gray shorts so they can look at your physique. (You can read about my Combine experience in one of my earlier blogs called “The Combine. Click HERE!)

My Pro Day consisted of doing D-Line drills and running the forty-yard dash. I ran a 4.72 forty-yard dash at 291 lbs. on that day. At my Pro Day, there were a bunch of scouts and coaches from various NFL teams, and they were all merely a few feet away from me as I was doing the drills and running. At the Combine, you see everybody with the stopwatches and clip-boards that they never seem to stop writing on, but at the Pro Day they are allowed to be right next to you. It really adds to the pressure of that particular day.

After my Pro Day was over, I stayed in Nebraska for the six weeks leading up to the draft. I was constantly flying in and out, visiting with teams. They show you their facilities as they all want to get to know you on a more personal level. They teach you some plays and see how well you catch on and try to see your intellectual side. I visited about ten different teams. I never knew when a team would call, or where I would be flying to next. I’d get a call and fly out later that day. I remember at one point, I saw seven different teams in seven consecutive days. I did not enjoy this part of the process. I am not a big fan of flying. It’s also hard to get a good workout in at hotel gyms. I always had to wear a suit. I hate wearing suits!

To be honest with you, I enjoyed most of the draft process, but it is hard work and it can truly be very exhausting. Finally, Draft Day was here, and I was so nervous! I had butterflies in my stomach like I was about to go play an actual game. All of the hours of hard work were about to pay off. I had no idea where I would go. I could go to an east coast team, west coast team, mid-west, north, or south. I had absolutely no say and no idea where I would end up. I remember I was at draft party in my parent’s house when I got the call. I actually got a little light-headed, and I couldn’t believe it. We paused the phone conversation so we could watch the commissioner announce it on television. I was the 13th overall pick in the first round by the St. Louis Rams. Later that day, I flew out and the next chapter of my life began. My life has never been the same since.

Draft Day is something you dream about and imagine before it happens. It’s almost something that you can’t believe is taking place, even as it is going on. It is an experience I will never forget. I am truly blessed and to this day, when I look at where/how I grew up, I could have never imagined half of this many good things happening to me. I had idea no then and still can’t believe now how lucky I am. I want to thank God for everything he has blessed me with; it is all truly beyond belief! I also want to thank everyone who helped me get to this point; I couldn’t have done it without you!