After the Summit by Akbar Gbaja-Biamila 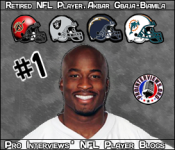 Akbar Gbaja-Biamila wrote his first article for Pro Interviews. Gbaja-Biamila played collegiately, for the San Diego State Aztecs, and then professionally, for the Miami Dolphins, Oakland Raiders, and the San Diego Chargers. He is brothers with Packers great, Kabeer Gbaja-Biamila. AGB wrote about the preparation of an athlete for life after the NFL. Make sure you check out our interview if you want some background information.

Everyone wants to make it to the top, but few are elite in their field. Many football players would consider the National Football League the eighth summit, giving North America two major summits.  That’s because the climb to the top takes years, and it starts as a youth in Pop Warner football.

Once you begin the climb and until you stop, coaches preach that you should breathe football everyday.  That mentality has “breeded” a generation of athletes who have committed eighty percent of their life to football and twenty percent to life after football. This is the ultimate, secret sacrifice that very few make to reach the summit known as the NFL.

When the game is done with you or when you are done with the game, the question all athletes ask themselves is, “What’s next?” Some players strive to pick up where they left off and duplicate that same success after football without the eighty/twenty sacrifices.

Thanks to icons like Earvin “Magic” Johnson and programs like the NFL Player Development -Career Transitioning Program, players are preparing earlier than ever for the game of life. Magic Johnson, who had business success off the field made it a fad and started a generation known as the “Showtime Generation.” Players are now starting to leverage their popularity into second career opportunities and continuing education.

Despite team management’s disdain toward athletes preparing for the game of life after sports, players must stay prepared during their playing days. With our global economy changing at a rapid speed, players can not afford to give up three to ten years to their future competitors. If you stay ready, you never have to get ready.