“For the Fans” From JetsCamp 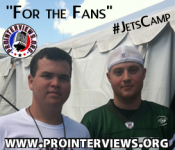 Read an article about JetsCamp on August 11th with exclusive interviews with the unique positive media questions that I bring to the NFL. The players I interviewed for this article are Mark Sanchez, Dustin Keller, Marquice Cole, and Head Coach Rex Ryan. The focus of my day was meeting a variety of Jets fans. I walked along the line to meet fans. I also wrote a little about the Jets “Play Like A Jet” scholarships that they gave two high school students.

This would not be possible without Dream Team Empire. www.dreamteamempire.com

Congratulations to two students, Ada Lee and Joseph Aduboffour who received $5000 scholarships from the New York Jets! Ada graduated from Francis Lewis High School and will be attending St. John’s University this fall. She was a member of the indoor/outdoor Track & Field teams as well as the Cross Country team. Joseph Aduboffour graduated from Frederick Douglas Academy and will begin pre-med this fall at Williams College. He was a member of Soccer as well as the Track & Field teams. This was part of a partnership between the Public School Athletic League of NYC and the New York Jets! (Both pictured above)

Some Notes from Player Conferences:

Mark Sanchez : @Mark_Sanchez : I asked him one question on how the veteran wide receivers can help the young guys… Well, I think right now guys are still getting used to each other, but when they’re in meetings watching one on ones (they have been helping each other). I told (Jeremy) Kerley to make sure he sits with Derrick Mason as much as he can because that’ll end up being his role as a slot player and to watch his routes. Mason is one of the best in the league at route running, especially from the slot position. So he’s helped him quite a bit and it’s only been a couple days but that kind of stuff is really going to wear off on our young guys and hopefully help them just like Shonn Greene learned from LaDainian Tomlinson, (as did) Joe McKnight.

Dustin Keller : @DustinKeller81 : On what his main focus to work on during camp… “My main focus is for the receivers and I to all be in tune with each other. For everyone to know what we’re doing. For everyone to know where we’re all going to be. We got to have a good relationship with each other whether that’s our spacing on routes, our blocking assignments, all those things.”

Marquice Cole : @quice : On being back on the football field… It feels great.  I was telling the guys today, everybody I saw, I missed them being gone for so long.  I had to take care of some stuff, but it’s great to be back.

Cole : On whether he physically feels like he can jump right back into action… Definitely, but like I said, to miss those days, nothing will make up for that.  I just have to go out here and do a little extra to try and get back and (be) ready.

Notes about the Jets’ Transactions:

The New York Jets signed Cordarol Scales (@Cordarol) so I asked Rex Ryan about him.

Some Notes from Coach’ Conference:

Head Coach, Rex Ryan : I asked him what he saw out of Cordarol Scales :  Yes, we [signed him]. I never saw a single tape of him, to be honest with you. I did not. I’m not telling that lie. He’s from Ft. Hays State, that much I know. We had him out here. I saw him work out. I was impressed with him. He catches the ball well. He’s a big receiver. He’s supposed to be a hard-worker and things. Obviously, our scouts brought him in here for a reason and we worked him out with a couple other receivers and we chose to give him the opportunity.

I also asked him on the progress of Jeff Cumberland… He’s done a great job blocking. Right now, I would put him in the average tight end blocking category for NFL tight ends, but that’s pretty good considering he was a wide receiver in college for the most part. He changed positions late in the season, so it’s kind of new to him. But he’s plenty tough and that’s it. I see him, he’s doing a much better job. Even pass blocking, on special teams I see it all the time. I think his arrow is going like this (pointing up). I think he has a chance to be a great one, I really do.

Some notes about the fans I met:

I got to meet a lot of fans of my site or the Jets today, but here’s a list of the ones who were both.  First off, I met @MissJtotheK and @L7Panda. I walked up to the Panda not realizing it was him, but asked him if I could take a photo of his @Plaxico jersey, then Joanne recognizes me. Pretty awesome stuff.  Then, I met @LAportal, that was totally awesome. She comes up to me, and was just like, ‘Are you Max?’ We talked from there. I met up with @craiglaurasam who was totally great. I was introduced to his father. Craig is a really nice guy.  I then meet up with @Nacarano who I met before at the @emanuelcook27 charity event. It was at the entrance of the Jets Shop, but we talked and updated each other about how things are going. He’s a great guy, and passionate Jets fan from South Florida. Then finally, a shoutout to @rachelstaebler, I didn’t get to meet her, but I did get to wave hi to her from a distance after tweeting with her.

Some Notes about the practice today:

Today was exciting, as it was mainly focused on goal-line and short yardage situations.

A surprise visit was made by former all-time great Jets’ running back, Freeman McNeil.

I was very impressed to see the shape that Marquice Cole (@Quice) was in on his first day back on the field in a while. He had a nice deflection during some drills.

I am excited to continue to watch the success of Michael Campbell (@MikeCam84). I enjoy watching all of his match-ups.

I also got to meet Chuck Vine (@TheTitanGrp) who set me up with my Nick Folk (@NickFolk2) interview. https://prointerviews.org/NickFolk

I was excited to meet the John Geiger, (@GeigerGeiger) during practice today. Totally cool experience, and really nice guy.

Watching Nick Mangold (@NickMangold) on the ground was definitely a shocker, but reports have it that he’s fine. He did walk off the field on his own strength too.

Stay tuned for updates from Florham Park, and if you have any suggestions or questions, email strauss@prointerviews.org