Quan Cosby grew up playing both baseball and football. After high school, he decided to pursue his dreams playing baseball and played for the Anaheim Angels from 2001 through 2005. He then went bak to college to pursue his love for football and went to the University of Texas from 2005 through 2008. He entered the 2009 NFL Draft, but didn’t get drafted. He signed with the Cincinnati Bengals, and he’s been primarily used as a kick returner and punt returner in the NFL. This interview was conducted the week before he got cut by the Denver Broncos. He ended up signing with the Indianapolis Colts. 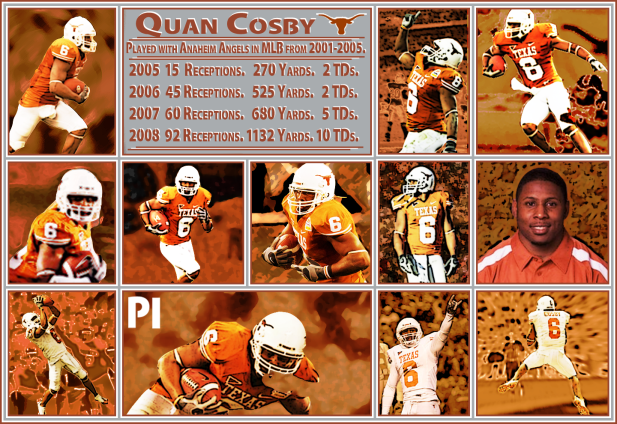 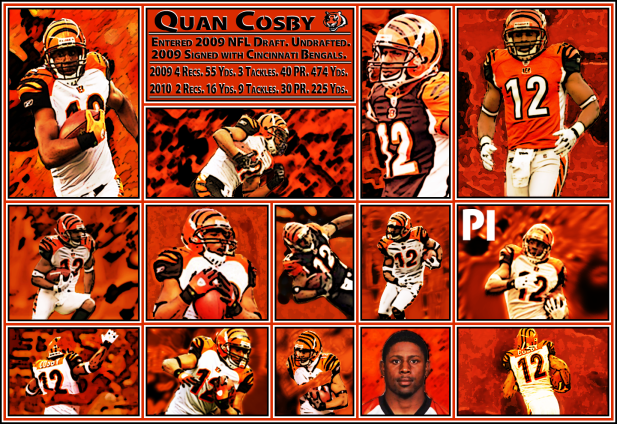 Strauss : What was the transition like to the Denver Broncos?

Cosby : It was great. The Denver Broncos are a first class organization and special team. There are great veteran leaders and some young stars in the making.

Strauss : What has Tim Tebow been like to you?

Cosby : He’s great and the same with everyone. He’s a great teammate but I don’t have a specific memory to share about him, however a lot of them are just in the exciting games. Seeing his composure and leadership during them.

Strauss : What’s the difference between how Kyle Orton approached the team, and how Tim Tebow does?

Cosby : The main difference was experience. Kyle Orton had more years and went about the team as a veteran. Tim Tebow had to earn that respect and leadership role and he did that by his work ethic and his competitive nature.

Cosby : Coach Fox is the real deal. Although, lots of people are getting credit for our success this season. He is at the top of the hill. His leadership and coaching style are exactly what this team has needed. His belief in us transformed our mindset, when things didn’t look so well. If he continues to do this, he should be Coach of the Year!

Strauss : Why do you use twitter? How do you connect to your fans?

Cosby : Fans make our game the game it is although they can be tough on us at times for them to feel somewhat a personal connection to us(pro athletes) and have real conversations with us I believe mean a lot to them, and to us also. We’re as “human” as it gets and like fans to know and realize that…

Cosby : There are many I’d like to meet, but if I had to pick one that I haven’t already met, being as blessed as I am it would be any kid that has it similar and as tough as I did as a child so I could let him/her know they can do better then statistics tell them, and encourage them to do so. Again, I’m very fortunate and have met many inspirational people. Most of my time now is spent trying to encourage youth.

Strauss : How long have you played football?

Cosby : I have played football since the 7th grade.

Strauss : Did you play any other sports in high school?

Cosby : Yes, I went to a small school so I basically played every sport football basketball baseball and ran track. I believe all the sports help the other plus I just really love to compete, not to mention living in a small town it kept me busy and out of trouble, was drafted in baseball and played pro baseball for four and a half years.

Strauss : What was your MLB draft experience?

Cosby : It was cool, kind of crazy, with so many rounds and people but fortunately being drafted in the sixth. I didn’t have to wait as long and loved every second of my time in Pro Ball, lots of life long friends.

Strauss : What is your favorite baseball memory from Baseball? Why?

Cosby : My favorite memory would be in the rookie league and getting to the championship game, and the plays made to get there had a great year. And again, the guys on that team I’m still in touch with and became great friends.

Strauss : What is the most important thing baseball has taught you that helped you the most in football?

Cosby : Baseball taught me to get my degree. Every year, I saw so many guys get released and have nothing to fall back on. And, that was a major factor in me going back to college. In football its taught me the importance of consistency.

Strauss : What sparked a change for you to decide to go to Texas?

Cosby : I chose Texas because it felt right and what I believed God put on my heart through prayer.

Strauss : What is your favorite memory from Texas?

Cosby : The National Championship and Fiesta Bowl, but also many great times with friends away from football.

Strauss : What was the best thing you learned at Texas that has helped you the most in the NFL?

Cosby : I learned to compete daily.

Strauss : Who was your best buddy from Texas? What was the best memory you had with that player?

Cosby : Too many to name one, fighting together and sticking together, on and off the field would be the best memories.

Strauss : What was your NFL draft day experience like?

Cosby : It was great spent it with the icon Dr. Bill Cosby and ESPN.

Strauss : Were you expecting to get drafted?

Cosby : I wasn’t, I live life a little different hoped to, but in my life back has been against the wall many times and I was prepared for that and to handle that possibility.

Strauss : What is your favorite memory with the Bengals?

Cosby : Clinching the division last year, was special for my teammates and me and to see the fan appreciation as well

Strauss : What’s your favorite thing to do in spare time?

Cosby : Hang and chill with family and friends, that’s what life is really about football can be a bonus but life with friends and more importantly family is the best

Strauss : Do you have a nickname? What’s the story behind it?

Cosby : If you play professional sports in my opinion, we all do. Mine, mainly is Q of course because of my first name, no real story behind it.

Strauss : What is your favorite charity? Why?

Cosby : I’m a social work graduate, so I don’t have a favorite I love them all but I really like Make A Wish Foundation, those moments for those unfortunately involved sometimes are the only truly high moments of their life and in the end. It’s an awesome moment for both parties, when kids come to us we learn and appreciate the kids just as much as they do us.

Cosby : Vanilla I am what I am, you can appreciate the norm or add a little something to get what you want, I change daily.

Strauss : What is your favorite quote? Why?

Cosby : “Live everyday like it’s your last.” …Because of the uncertainty of life of course.

Strauss : For someone aspiring to play football in the NFL, do you have any advice for them?

Cosby : Get your education first but don’t let anyone tell you that you can’t… If you believe, there is always a possibility.